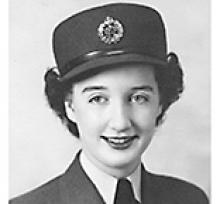 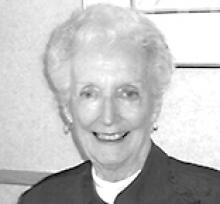 ISOBEL GEORGINA MOONEY (née MARTIN) October 12, 1925 - August 7, 2018 Isobel Georgina Mooney (née Martin) born in Winnipeg October 12, 1925, passed away peacefully on August 7, 2018 at Riverview Heath Centre, Winnipeg. Predeceased by sister Eileen Harris, brother Raymond Martin and her husband and love of her life, Bud (John) in 2006. Survived by her daughter Valerie (Henry) Klassen of Winnipeg, son Gordon (Barb) Mooney of Edmonton, grandchildren, Matthew (Sonja), Geneva (Tony), Sam (Cindy), Jill (Kevin) and Jeff (Marissa), great-grandchildren, Thea, Eyvind, Thomas, Isla and Ellis, and sister-in-law Janet Martin of Winnipeg. Isobel was born to Marie and George, and grew up during the difficult Depression years, looking after her younger siblings and doing everything the family needed to make ends meet. Duty called in the form of the Second World War and Isobel left Winnipeg on her 18th birthday to serve in the RCAF (WD) in Halifax, Bomber Operations, Eastern Air Command. Returning to Winnipeg after the war, she worked at the CBC and as a receptionist and medical assistant to Dr. McGuinness and Dr. Tanner in the old Medical Arts Building. Isobel and Bud met in the mid 40s, double dating with Bud's sister Renee and Roy McFarlane. They married in 1948. They moved to Fort Garry where they raised their family, and became active community supporters. Isobel served on the Executive Committee of the St. Paul's Anglican Church Parish Guild, and actively supported the Fort Garry Community Club. She took up curling at the Pembina Ladies Curling Club, enjoying some competitive success with Eileen Lynch, Sherry Howe and Margaret Horn. She eventually became President of the PLCC, and was honoured with a Life Membership in recognition of her many contributions to the club. Isobel worked as a secretary and executive assistant in the Dean's Office, School of Nursing, University of Manitoba, where she was instrumental in setting up the new Bachelor of Nursing program. Her excellent organizational skills were also brought into use at Contact Community Information, a pre-internet resource for social services in Winnipeg. Bud's airline career allowed them to see many parts of the world, when air travel was still something special. Their favourite destinations included Jamaica, Scotland, Greece and New Zealand. In 1977 Isobel and Bud realized their dream of owning a cottage at Wallace Lake, which became a happy gathering place for family and their many friends. In 1987, life became even sweeter as they began spending winters in Palm Harbor, Florida, again making many new friends. In 2002, Bud's health caused a change in plans, and they spent three winters together in Victoria. After Bud died in 2006, Isobel continued to travel to visit grandchildren in Alberta, Mexico and the Bahamas. She moved to Lions Place, where she met a new community of friends, especially at the Adult Day Club. Isobel learned early on in her life to battle through hardship, and she never gave up - overcoming numerous bouts of cancer that would have defeated most women many years ago. She soldiered on, inspired by her love of family and life in general. Thanks to the wonderful staff at Riverview Health Centre for their excellent professional care and their compassion during the last few months. Special thanks to the kind and caring staff of Tina's Tender Loving Care. Thanks also to Dr. Pat Harris, who helped Isobel fend off cancer no less than four times and to Dr. Tamara Buchel. Friends may make a donation in Isobel's memory to the Riverview Health Centre Foundation or CancerCare Manitoba Foundation. Cremation has taken place. A celebration of Isobel's life will take place at 10:00 a.m. Friday, August 31, 2018 at Thomson "In The Park", 1291 McGillivray Blvd., Winnipeg. THOMSON FUNERAL HOME 204-783-7211 Condolences may be sent to www.thomsonfuneralchapel.com