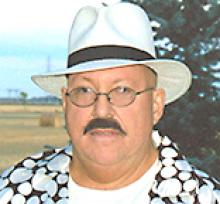 DONALD GARRY LUDWIG It is with sadness and heavy hearts we, his sisters Dianna Lynn Bailey and Connie Leona Nasif, announce the sudden passing of their dear brother, Donald Garry Ludwig, aged 67 years, on July 3, 2018, in Las Vegas, Nevada, on the second day of his much desired holiday and doing the most enjoyed hobby in his life - dancing. Donald was a wonderful brother and friend and enjoyed countless hours of working in the food industry in Winnipeg, Toronto, Vancouver and Gimli. At the time of his demise he was employed with Red River Community College, leaving a host of co-workers that will miss him dearly. Besides his sisters, Donald is survived by brother-in-law Monir Nasif; nephew Adam Nasif and family, Jenna, Sofia and Meena Nassif. Donald was predeceased by his parents Dorothy and Harry Ludwig; brothers-in-law Mel Janisch and Ron Bailey. Besides his cooking, he enjoyed shopping, having dinners and summer barbecues. Special thanks to Jenna and Patti for being there with Donald at the end of his life. Rest In Peace, Dear Brother. A private family setting with burial of ashes will take place at a later date. You will never be forgotten, brother Donald! Those who knew you - loved you!