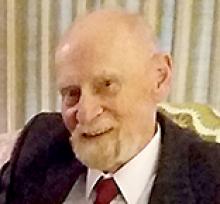 JOHN (JACK) LUMSDEN 1941 - 2018 On Friday, August 24, 2018, John (Jack) Lumsden passed away at the Health Sciences Centre. Jack was predeceased by his parents and his in-laws, Arnold and Merel Lemkey. He is lovingly remembered by his wife of 51 years, Donna, daughter, Kathryn and husband, Paul Dueck, grandchildren, Zachary and Gillian, sister, Heather and husband, Wayne Thorpe, their children, James and Michelle (Rob) and their families. Jack was born October 4, 1941 to John (Jack) Sr. and Christina (nee Gordon) Lumsden of Winnipeg and on August 5, 1967, Jack married Arleen Donna Lemkey, also of Winnipeg. Jack worked for the Royal Bank of Canada for over 35 years in various Manitoban communities as well as Port Arthur (Thunder Bay), ON. He retired in 1996. In addition to enjoying his home and family (especially his grandchildren) over the years, Jack also enjoyed many sports including curling (from birth), baseball, golf and, as a senior, floor curling. He had also been active in Lion's Clubs in Waskada and Winkler. A Come and Go memorial reception will be held at 2:00 p.m. on Tuesday, September 4, 2018 at the Winkler Days Inn Conference Centre with a private family burial at the Westridge Memorial Gardens in Winkler. The family sends thanks to the doctors and nurses of the IICU at Health Sciences for their care of Jack and to cousin, Arlene Jones for her visit and care during Jack's illness. In lieu of flowers, donations may be made in Jack's memory to the Health Sciences Centre Foundation or Siloam Mission. Wiebe Funeral Home, Winkler In care of arrangements wiebefuneralhomes.com