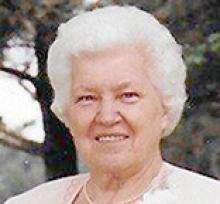 MOLLIE CAROLINE SCHARNIK (nee DURR) Grateful for her long and happy life the family announces the peaceful passing of Mollie Scharnik on Tuesday, August 28, 2018 at the age of 98. Amalie (Mollie) Karolina Durr was born in Winnipeg on October 14, 1919 to Anthony and Christina Durr, the middle of three sisters. Predeceased by her brother Frank in infancy. Mollie attended Anna Gibson and Lord Selkirk School completing Grade 12. Mollie married Bernard Fred Scharnik on August 23, 1941. They purchased their first home from Mollie's father on Johnson Avenue in Elmwood. After Bernard's passing in 1994 at the age of 82, Mollie remained in her residence until April 11, 2018. Family was important to Mollie. She and her sisters, Millie and Elsie, began the family tradition of hosting holiday dinners. Long tables filled the living rooms and were crowded with adults, children, good food and lots of laughter. Mollie was a lady who enjoyed the simple things in life. She was fortunate and grateful for a very sound mind as she aged gracefully. She was a very kind, friendly and loving person who always put others first. Her greatest joy was being together with her children, grandchildren and great-grand daughter. Mollie will be sadly missed by her family. She is survived by her son Richard (Trish), daughter Barbara Wray (Dennis), son Randy (Hazel). She is also survived by her grandchildren Stacy Scharnik (Rob), Lindsay Skelly (Ian), Mitch Scharnik and great-granddaughter Rylee. Mom is also survived by nieces, Gayle (Terry Clifford), Maureen (Ken Johnson), and Sherri (Robert Dowler), nephew-in-law Bill Spelmer and their extended families. She was predeceased by her grandson Leigh Scharnik, sisters, Millie Porth and Elsie Robertson, brothers-in-law, George Porth and Jack Robertson, nieces, Lorraine Spelmer and Beverly Prest, nephew-in-law Bob Prest. Our heartfelt thanks to the amazing nurses and caregivers at Park Manor for all their love, care and compassion which they showed mom during her four months there. According to Mollie's wishes, she will be buried in Brookside Cemetery alongside her beloved Bernard. Funeral service will be held at Klassen Funeral Chapel, 1897 Henderson Hwy. on Thursday, September 6, 2018 at 10:00 a.m. A private family interment will take place after the reception. Flowers are graciously declined. If friends or family wish, donations may be made in Mollie's memory to "Elmwood High School Legacy Fund" (wpgfdn.mycharitytools.com). KLASSEN FUNERAL HOME 1897 Henderson Highway, Winnipeg, MB (204) 338 0331 Condolences may be sent to www.klassenfuneralhome.com