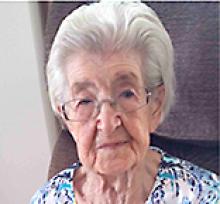 SUSANNE KUHL (nee HARDER) 1914 - 2018 With peace and dignity, Susanne Harder Kuhl went to her eternal rest on Monday, September 10, 2018 at Pembina Place Personal Care Home in Winnipeg, Manitoba, a life well lived. She reached the age of 103 years, 10 months and 27 days. We will miss her prayer support and thank God for keeping her in relatively good health for so many years. Susanne was born on October 14, 1914 in Michaelsburg, Russia, the first child of Jacob and Helen (Krause) Harder. She immigrated to Canada in 1926 with her mother's second husband, John Enns and family. She met the love of her life, Henry H. Kuhl, in Gnadenthal and they were married on July 10, 1938. They were together for more than 73 years, always supporting each other, through the farming years and on in to retirement. Susanne faithfully visited Henry during his final years and those who witnessed it described it as a lesson in devotion. Susanne was a loving, caring mother to their five children and bestowed her love on the next generations as well. Susanne was an excellent homemaker, an avid gardener and volunteered in many capacities in Winkler. She was predeceased by her beloved, Henry in 2012, son, Kendal in 1962, daughter, Irene in 1994, and daughter, Cecile and daughter-in-law, Susan in 2015. She was also predeceased by her mother, Helena Harder Enns and her husband, John Enns, sister, Lena Manke, brothers, Peter, Abram, Cornelius and John Enns, as well as many members of Henry's and her extended family. Susanne is survived by sons, Don (Liz Kuhl) and Henry James (Karen Braun), as well as sons-in-law, Jake Toews and Henry Voth. She is also survived by 10 grandchildren, 21 great-grandchildren and two great-great-grandchildren as well as in-laws, Helen Enns, John Kuhl and Evelyn Dyck. Memorial service will be held at 11:00 a.m. on Thursday, September 13, 2018 at the Days Inn Conference Centre, 395 Boundary Trail in Winkler with interment prior at 10:00 a.m. at the Winkler Cemetery. The family would like to thank the staff at Pembina Place for their care and also to the many people who helped her when she lived independently in Crocus until 2017. Donations may be made in Susanne's memory to the MCC, designated to the Winkler Thrift Shop. Wiebe Funeral Home, Winkler In care of arrangements wiebefuneralhomes.com