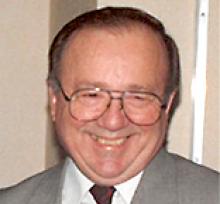 JOHN BOYECHKO Mr. John Boyechko, age 82 years, passed away from natural causes, at his residence located at Amber Meadow Complex in Winnipeg, MB, on September 9, 2018. Born in Weiden, MB on August 16, 1936 to parents, Peter and Effie (nee Maksymchuk). He attended the one room country school in Weiden and helped his parents on the family farm until he decided to move away to find work in Winnipeg. John found employment at the Winnipeg Health Sciences Centre as an assistant pharmacist and lived in Winnipeg for his entire adult life. He enjoyed his time at the pharmacy until his retirement in 2001 at age 65. He worked at the same job for almost 40 years. John will be fondly remembered and sadly missed by his sister Jennie Stykalo, brother Russell (Shirley) Boyechko, sister-in-law Adeline Boyechko, godson Larry Stykalo, goddaughter Candace David, special cousin Cheryl (Darryl) Boguski (nee Maksymchuk), and numerous nieces, nephews, cousins and friends. He was predeceased by his father Peter in 1968, mother Effie in 1993, brother Alec in 1963, sister Bernice in 1970, brother-in-law Harry Stykalo in 2002, brother-in-law Nick Boyechko, special Uncle and Auntie, Mike and Jean Maksymchuk. John may have resided in Winnipeg, however his roots were always back at the family farm in Weiden. He travelled many times a year to visit his mother Effie. He enjoyed many of his vacations at the farm and at his sister Jennie's where he enjoyed her cooking and visiting with Harry. Jennie always looked forward to when John would come for seeding or harvest. He spent many Christmas' and Easters back in Weiden and later in life with the Maksymchuk family in Winnipeg. He enjoyed some travelling to destinations like Mexico, various states in the USA, and RV'ing with the Maysymchuk's in Canada. John was a member of St. Joseph's Ukrainian Catholic Church in Winnipeg where he regularly attended services, he was a member of the Legion where he could be found dancing and socializing on a regular basis. He had a soft spot for animals and could often be found at the pet store watching the many birds and animals. John lived a very humble and simple life. We will miss his unique laugh, his jokes and many antics. Vichnya Pamyat Funeral service will be held on Friday, September 14, 2018 at 11:00 a.m. from Sneath-Strilchuk Family Care Centre in Dauphin, MB with Very Rev. Father Oleg Bodnarski officiating. Interment will follow in Weiden Ukrainian Catholic Parish Cemetery. Sneath-Strilchuk -Dauphin Chapel 204-638-4110 www.sneathstrilchuk.com