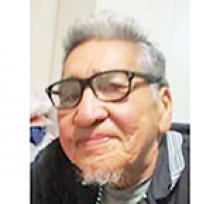 RUSSELL STARR With heavy hearts we announce the passing of our dad, Russell Starr, on September 11, 2018. He was 70 years old. Russell was predeceased by his grandparents, Edward and Harriet Harry, his parents, Donald Edward Starr Sr. and Edna Hilda Mann, his siblings, Doug S., Don S., Linda Kulyk, Ron, Jeannine Choken, Evelyn Starr and Randy Mann, his son Cody S., his grandson Eric S., and his great-grandson Rishon. He was also predeceased by Frances Starr, his partner of 30 years. He is survived by his siblings, Myrtle A., Mel A., Lorna, Ernest, Alma, Suzi, Patrick, Bradley and Hilda, as well as his children, Rhonda, Shannon, Geoff and Vernon. He is also survived by many grandchildren, great-grandchildren, nieces, nephews and friends. The pallbearers are Vernon Starr, Jd Starr, Ernest Mann, Mel Abraham, Charles Abraham and Derek Abraham. Honorary Pallbearers are Geoff Starr, Josh Starr and all his friends. A wake has begun Thursday evening, September 13. The funeral will be held at St. George's Anglican Church in Black River on Monday, September 17 at 2:00 p.m. Interment will follow in the parish cemetery. Funeral Arrangements entrusted to: Rock Fontaine Funeral Director Honour - Respect - Dignity (204)223-2576 or (866)499-2601