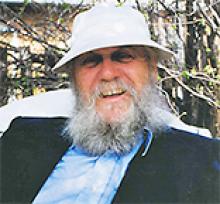 WALTER VLADIMIR KRIVDA BA, BAG, CSE February 24, 1932 - September 17, 2018 It is with great sadness we announce the sudden passing of Walter Krivda. Walter died peacefully in his sleep at St. Paul's Personal Care Home, in The Pas, MB, on the evening of Monday, September 17, 2018, at the age of 86. He was predeceased by his father John, his brother Arnold and his mother Annie. Left to mourn his passing are his nephews, Kevin (Amanda), Keith, Marty, Greg, John, Vance, Vernon; niece Debbie; and longtime friend Gene Germain, and other family and friends. As a child, Walter was fascinated with nature, he could often be found catching bugs, chasing butterflies and pressing flowers. Even as a teenager when most of the kids would be hanging out at the Paris Café, he could be found picking mushrooms or exploring and collecting specimens in the fields. Walter's childhood included his most cherished memory of the day, his baby brother Arnold was born. Arnold became his student and friend. They remained close throughout their lives and Walter never really did accept his brother's death in 2004. Walter lived for years with his mother Annie in the home his father John built on Crossley Avenue. They could often be found in their gardens, making preserves or telling stories until she had to move into St. Paul's Personal Care Home. Walter obtained his education from the Universities of Manitoba and Winnipeg. He worked in various locations as a Park Naturalist, Botanist, Entomologist and Teacher, until he yearned to return to his home in The Pas. He then began a long career as a Professor at the Keewatin Community College. Forty years later, he officially retired but still felt the need to educate and continued tutoring students. He was proud of his students and always spoke of them, even during his last days. Walter thought of every person he met as a friend, a confidant and someone he could advise. Walter was the recipient of the award for Memorable Manitobans. This was awarded to him for his contribution to Manitoba in the teaching profession and for his many years of research in natural history and work for museums. Walter lived an extraordinary and happy life learning, teaching, collecting specimens, giving lectures at various universities and telling stories. Walter was a pillar of the community, a local historian and legend of The Pas. He was a kind, gentle, generous, unique man with a great sense of humour. He was often seen giving away fruit to anyone passing by or saying hello to him. Some of the local children knew him as Santa, we knew him as Uncle Walter. Until we meet again. "See Ya Later" Funeral service to be held at the Our Lady of the Sacred Heart Cathedral, The Pas, MB, Monday, October 1, 2018 at 1:00 p.m. There will be a viewing for friends and family from 11:00 a.m. to 1:00 p.m. Private interment to follow. In lieu of flowers, donations to the Heart and Stroke Foundation of Manitoba, 6 Donald Street, Winnipeg, Manitoba R3L 0K6, would be appreciated by Walter's family. Hemauer Funeral Home and Cremation Services, The Pas, are in care of arrangements. For online condolences, visit www.hemauerfuneralhome.com