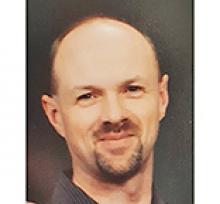 JOHN AMBROSE BECKER September 27, 1961 - September 23, 2018 It is with heavy hearts we announce the passing of our beloved husband, father, brother and son. On September 23 of this year, John passed away at St. Boniface Hospital after a very brief battle with cancer. He is survived by his wife Teresa (nee Anderson), children, Inna, Tanner and Shane, parents, Roman and Laverne Becker, sister Lorna Henry (Kelvin), and nephew Travis. John was born in Shellbrook, SK, attending school in Foxdale, Shellbrook and Birch Hills, graduating in 1979. He immediately moved to Alberta where, before long, he created, produced and distributed his own board game, Endeavour Eleven. Beyond that, he established himself as a trusted sales rep in the giftware / greeting card / home decor industry before being transferred to Winnipeg in 1991. He met and married Teresa shortly thereafter, and more than anything, he loved being the dad to his three kids. He joked that he was a simple farm boy and it was his dream to move back to the country and live off the land. He loved hockey (playing goal year-round and watching the Jets) and football, remaining a Roughrider fan his whole life. His most recent passion was board games, and he became known around town as "the board game guy". If there was ANY game someone wanted, he could get it for them. He will be remembered as a selfless, warm-hearted goofball who consistently endeavoured to bring joy to the people around him. Celebration of Life to be held at Springs Church, 725 Lagimodiere Blvd., Winnipeg, MB on Thursday (today), September 27 at 2:00 p.m. Pastor Jacquie Fontaine officiating In lieu of flowers, please consider making a donation to the Men's Resource Centre of Manitoba or the Canadian Mental Health Association. Funeral Arrangements entrusted to: Rock Fontaine Funeral Director Honour - Respect - Dignity (204)223-2576 or (866)499-2601