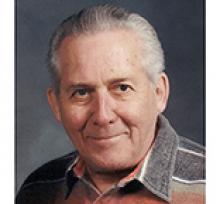 DR. JOHN F. S. HUGHES After a long and full life, John passed peacefully, surrounded by family, on September 30, 2018. Predeceased by his beloved wife, Jeannie in 2011, he leaves to mourn his passing seven children: David (Chris), Deb (Greg), Michael (Mary), Sue, Marg (John), Jen (Myron) and Lin (David); his 15 grandchildren: Keri (Jordan), Kevin (Cortney), Kaitlyn, Kristin, Monica (Chris), Jenny (Kyle), Michelle (Hayden), Michael, Andrea (Cody), Nicole, Sarah, Stephen, Bryan, Matthew and Patrick; and his four great-grandchildren: Thompson, Brock, Connor and Charlie. John was born and raised in Winnipeg, later to graduate from Medicine in 1949 from the University of Manitoba. After an internship and masters he married Jean whom he met on a blind date and they started their life's adventure in London, England where he accepted a fellowship at West London Hospital. They began their family in London. After two years they returned to Canada where he completed his FRCP in Internal Medicine and came on staff at St. Boniface General Hospital where he remained until his retirement in 1991. John and Jean completed their family of seven moving from Maplewood to Westgate, and finally to their cottage retreat at Victoria Beach. In their retirement they travelled the world, spending winters in Australia, New Zealand and the Canary Islands to name a few. John's life will be celebrated at 2:00 p.m., October 12, 2018 at St. George's Anglican Church, 168 Wilton St., Winnipeg, Manitoba. In lieu of flowers, donations can be made to the C.N.I.B. or St. Boniface General Hospital Research Foundation. www.voyagefuneralhomes.com