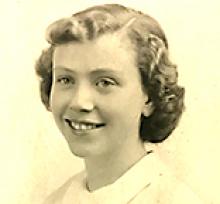 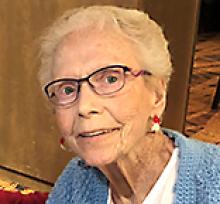 MOIRA GWENDOLYN BONAR (nee INNES) Moira ('Mo', 'Moi') Gwendolyn Bonar (nee Innes) passed away October 5, 2018 at the Brandon Regional Health Centre Palliative Care Unit after a two year battle with cancer. Moi was born February 28, 1936, the youngest of five children to Laura (Holmes) and Allen Innes of Deloraine, Manitoba. The family moved from the farm to town in 1944, and shortly thereafter Moi was the only child living at home. She was an excellent student and upon graduating at age 17 from Deloraine Falconer Collegiate, she moved to Winnipeg to train as a legal secretary at Winnipeg College. She was fortunate to live with her oldest sister, Marjorie Asgierson and developed a close bond to her nieces and nephew Lynn, Laurie and Barry. Moi returned to Deloraine to work for the Colquhoun Law office in 1954. Soon after, she was introduced to the new doctor in town, J. Gordon ('Doc') Bonar. A brief courtship led to their marriage on August 18, 1955, and the building of their family followed quickly with the birth of four boys and two girls. It was a busy household and Moi had to be very organized given the amount of time Gordon spent running his medical practice (which included building the office), managing hockey, volunteering, and serving on town council. Moi also did her fair share of coaching and volunteering, as well as transporting their kids and teammates to and from their various activities. She served for many years with the Royal Purple, Elks, Legion, United Church, Border Festival, 4-H, Centennial, Deloraine Curling and figure skating clubs, and also played softball with many of her friends on the Deloraine Ladies Ball Club. Moi enjoyed politics, travelling, reading and watching her sports; baseball in particular. During summer months, Moi moved out to the cottage at Lake Metigoshe with the kids and there were countless good times for the children, for Moi and Doc, and for their many family friends and relatives who visited. Once the kids were entrenched in their careers, Moi started to focus on some personal interests. One interest, in particular, was moving from a long standing volunteer to running as a Liberal candidate for the Arthur Constituency in 1985. This of itself is a testament to her courage as this was a staunchly conservative riding. She also helped her son Jim establish his dental practice in Deloraine and worked as his receptionist for a few years. Moi moved into Winnipeg in the late 1980s and worked at an insurance agency and was able to reconnect with her sister Marj. She established many new friendships while in Winnipeg, mostly through her membership at the Charleswood Curling Club. After almost 10 years in Winnipeg, the draw to move back home was too great, so she returned to Deloraine and undertook renovating the family cottage into her permanent year round home. She enjoyed these years curling, golfing, volunteering, and just being with old friends. She also took pride in crocheting afghans and baby outfits, many of which she entered at local fairs. It was very important to her that all of her family had some of these as keep sakes. Unfortunately, an inner ear problem curtailed her sports activities, but she continued to enjoy them as a spectator, particularly when it involved her kids or grandkids. Moi was happiest when surrounded by family, especially at the large gatherings of relatives when she could visit with all the nieces, nephews and their families. She always beamed with pride when talking about her extended family. Being the last living sibling of her family, she felt honoured to surrogate for her siblings' children and their grandchildren. The two year struggle with cancer was daunting, but she rarely complained, only being grateful for having her family around more to visit. There were a lot of laughs and a few tears, and her bravery never wavered throughout this ordeal. Her protracted stay in the Palliative Ward allowed her to establish wonderful relationships with many nurses, aides and doctors who became like a second family. Moi was predeceased by her husband Gordon, infant son Darcy, parents, Allen and Laura, siblings and in-laws, Marj (Archie), Don (Alma, Margaret), Tom (Maurice) and Jim (Trudy). She is survived and greatly missed by her children, Dan (Sharon), Jim (Sandy), Geoffrey (Pam), Maureen (Claude) and Carla (Sam), and grandchildren, Ashley, Andrew, Krista, Darci (Cam), Paul (Sara), Haley (great-granddaughter Clementine), Torey, Kelsey, Sydney, Zoe (Tanner), Marly and Jamie-Rae. Moi is also survived by her many cherished nieces and nephews, and dear brother-in-law, Geordie (Doreen). In lieu of flowers, donations can be made to the Elks & Royal Purple Children's Fund, KidSport (Westman Region), or CancerCare Manitoba. Cremation has taken place and funeral arrangements by Smith's Funeral Home. A Celebration of Life for Moi will be held on Saturday, November 24, 2018 at 2:00 p.m. at the Deloraine Community Hall. Smith's Funeral Home (204) 747-2088 www.wheatlandfs.com