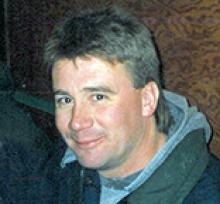 FREDERICK ROGER GRAY July 26, 1966 - October 3, 2018 It is with extreme sadness that we announce the sudden and unexpected passing of Roger Gray. Roger was predeceased by both his parents, Fred and Gail Gray. Roger leaves behind to cherish his memory his life partner and best friend of over 18 years, Debbie Henzel; his two sons, Russell and Ryan (Eva); his brothers, Wendall (Beryl), and Mark (Emma); and sister Brenda; nieces, Emily and Taylor; nephews, Derrick and Will, as well as many aunts, uncles, cousins and numerous friends. Roger was born and raised mostly within the Selkirk area, with the exception of a short move to Gillam. After graduating from high school, Roger started to work as a semi truck driver. He was employed hauling long distances with Kleysen Transport, Safety Kleen, and finally with CP Rail. It was through his driving experiences that Roger had the opportunity to meet and interact with various people, which ultimately led to many invaluable friendships. With his outgoing personality and witty sense of humour, Roger made numerous friends in various circles, from his hockey league to his friends on the golf course. As a warm, generous person, Roger would often donate money or volunteer his time to different organizations such as The War Amps or Siloam Mission. He would always find a way to lend a helping hand to those who needed assistance, whether it be his sister or to those less fortunate. During his time off, Roger had many interests. He enjoyed cruising on his motorcycle with his brother Wendall, golfing, watching the Sports or CNN channel, walking in the park, or just spending time with his partner. Roger, you were dearly loved and will be missed by all. The families of Roger Gray would like to extend their appreciation to CP Rail for all of their support and guidance during this difficult time. Visitation will be held on Thursday, October 18, 2018 from 7:00 p.m. to 8:00 p.m. at Klassen Funeral Home. Celebration of Life service will be held on Friday, October 19, 2018 at 10:00 a.m. at Klassen Funeral Home, with reception to follow. KLASSEN Funeral Home 1897 Henderson Highway, Winnipeg, MB (204) 338 0331 Condolences may be sent to www.klassenfuneralhome.com