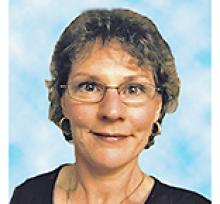 SHELLEY JOY CECILIA USICK (nee TAYLOR) On October 2, 2018 at 6:05 a.m., Shelley went to be with her Saviour and Lord. Shelley was born January 29, 1960 to Melvyn and Gretta Taylor in Eckeville, Alberta. At three months of age, her family immigrated to Mill Valley, California, where she completed Grade 2. Her family then moved back to Canada, settling in Minnedosa, Manitoba, where she finished Grade 12. In 1978 she met the love of her life, Lonnie. They were married over 39 years and were blessed with three beautiful daughters, Carolyn Anne, Jennifer Dawn and Nicole Marie (twins). When the youngest girls were in kindergarten, Shelley went to work to help with household expenses and attended night school. Eventually through a combination of CGA and RRC courses, she earned three Red River Certificates. In conjunction with her education she obtained a position with the Federal Government moving from department to department as her career progressed. In 1997 she joined the facilities staff at the Canadian Science Centre for Human and Animal Health, eventually rising to manager of Property Services. Growing up, the family enjoyed camping at Clear Lake and sharing the holiday time with the Usicks (Newdale) and Taylors (Minnedosa). Early in adulthood, Shelley recommitted her life to God. From then on, Shelley kept her relationship to God first in her life, with husband and family close behind. Shelley enjoyed seeing Canada; camping coast to coast in summer. In February she enjoyed the Caribbean Islands, going to Jamaica five times. In the summer of 2010, Shelley was diagnosed with brain cancer and went on disability retirement to undertake treatment. In the years following her diagnosis, life continued to move on, Nicole married Luc Parent in March, 2011, and Jennifer married Russel Franklin in June, 2013. But, best of all Shelley and Lonnie became first time grandparents (Baba and Gido) in January, 2012. Madison Parent was the apple of her Baba's eye. Three years later God blessed them again with the arrival of Emily (Madison's little sister). Two precious grandchildren. Funeral service 10:30 a.m., Wednesday, October 17, 2018 at Calvary Temple, 400 Hargrave Street, Winnipeg, Manitoba with visitation one hour prior. Cremation to follow. God Bless You All. Bardal Funeral Home 204-774-7474 Condolences: www.bardal.ca