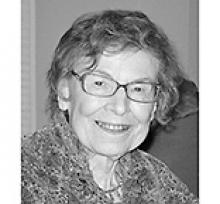 PAULA ACHTEMICHUK March 2, 1927 - October 7, 2018 May dear Paula rest in peace. With love from her second cousins, Susan Semeniuk, Connie Chappel and Len Paquin (Connie's husband), who helped Paula travel during her final journey. Paula was predeceased by her parents, Wasyl and Lena; her brother Henry; and her sister and confidant, Mary Stucker. Paula was born in Kamsack, Saskatchewan and raised on a farm. In 1950, she was awarded a permanent first class certificate from the Department of Education in Saskatchewan and became a Primary School Teacher. As a member of the civilian component, Paula moved to Germany in 1960 and taught the children of families in the Canadian Armed Forces. Upon returning to Canada she moved to Winnipeg and earned a Bachelor of Education Degree from the University of Manitoba. Paula's love for teaching became a rewarding 35 year career. She taught primary grades mostly in the downtown area of Winnipeg. She loved her students and they loved her back, as evident by their letters and notes which Paula treasured. Working as a teacher allowed Paula to travel and see the world during breaks. Her adventurous spirit carried her to Bangkok, China, Egypt, kingdom of Jordan, New Zealand, Fiji and many European and South American countries. Paula had a cottage in the village of Dunnottar where she enjoyed the nature at Lake Winnipeg. After retiring she spent the winters in Victoria, BC. Her sister Mary would travel from Florida to meet Paula there. Into her early 80's, Paula drove by herself to Victoria from Winnipeg. She loved driving her car through the mountains to her winter getaway. Paula enjoyed naturopathy, opera, and the symphony. She was a member of the Winnipeg Art Gallery and the Ukrainian Cultural and Education Centre. In 2016, Paula moved to the Portsmouth before moving to Charleswood Care Centre this year. She lived her last five weeks at Riverview Health Centre. Paula's interment took place on October 11, 2018 at Thomson "In the Park" Cemetery, 1291 McGillivray Boulevard, located in Winnipeg, Manitoba. Many thank yous are extended to the staff at all three facilities for the compassionate care provided to Paula as her blindness and dementia advanced. THOMSON "IN THE PARK" 204-925-1120 Condolences may be sent to www.thomsoninthepark.com