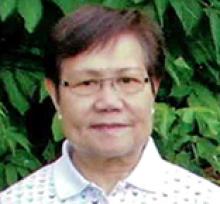 SAU KWAN MA It is with great sadness that the family of Sau Kwan Ma announces her passing on Saturday, October 13, 2018, at the age of 80 years. Born in Hong Kong, Sau Kwan moved to Canada with her husband, Shiu Yam and son, Yau Man (Norman), in 1968 and first settled in Kindersley, Saskatchewan. Eventually the family moved to Winnipeg, which became their home. Sau Kwan worked as a sewing machine operator at Rice Sportswear for at least 20 years from which she retired. After her retirement, she enjoyed travelling and becoming a member of the West End Senior Centre where she took English classes and participated in various social activities. She also treasured time spent with friends, meeting them for lunch at the Portage Place food court after her daily workouts at the downtown YMCA Fitness Centre. Sau Kwan will be lovingly remembered by her son, Norm (Darlene). Sau Kwan will also be fondly remembered by her large family of sisters and brothers, nieces and nephews and other family members from around the world (Hong Kong, Vancouver, Calgary, Toronto and points in between). Sau Kwan was predeceased by her husband Shiu Yam Ma. The family would like to thank the following institutions for the wonderful care and support in which they have given Sau Kwan over the last few years: Grace Hospital, Deer Lodge Centre and the Seine River Retirement Residence. Visitation 6:00 p.m. to 9:00 p.m., Sunday, October 21 at Bardal Funeral Home and Crematorium, 843 Sherbrook St., Winnipeg. A funeral service in memory of Sau Kwan will be held 1:00 p.m., Monday, October 22 at the Bardal Funeral Home and Crematorium, 843 Sherbrook Street, Winnipeg. Interment will follow at Brookside Cemetery, 3001 Notre Dame Avenue, Winnipeg. In lieu of flowers, charitable contributions can be made to the Grace Hospital Foundation. Bardal Funeral Home 843 Sherbrook Street, 204-774-7474 Condolences: www.bardal.ca