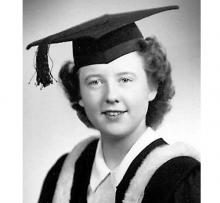 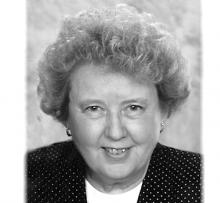 LOIS DAWN (TOMES) FREDRICKSON Lois Dawn Fredrickson, wife, mother, grandmother, teacher, mentor and friend to many in the community of Winnipegosis, passed away on October 8, 2018 at the age of 89 years. Predeceased by her husband Bui in 2008, Lois is survived by her daughters, Jaye (Ian) and Joanne (Allan); her son Walter; her grandchildren, Lachlan, Ashley, Robert, Laura, and great-grandson Trent. Lois Dawn Tomes was born at her grandparents' farm - the Fletcher family farm near Plumas in the RM of Westbourne, Manitoba on December 8, 1928. She grew up at Oakville, Manitoba where her parents, Walter and Violet Tomes, ran the Post Office. As soon as she was old enough, she became the third person on staff in the post office after school hours. Lois graduated from high school at Oakville and went to United College in Winnipeg. She received the Bachelor of Arts degree from the University of Manitoba and came to Winnipegosis, where her Aunt Jay and Uncle Jack Howson lived, to teach grade two. In 1950 she married Bui Oscar Fredrickson whose family had been engaged in commercial fishing on Lake Winnipegosis since the early 1900s. For seven years their lives were regulated by the fishing seasons -- which meant that they spent the fall season (July to September) at Channel Island, the winter season (October to February) at Oscar's Point in the north basin of Lake Winnipegosis, and the rest of the year in town. When their younger daughter was ready to start school, they decided that they should all stay in town. Lois went to work at the Winnipegosis Collegiate, where she was the Social Studies teacher for 15 years. During this time and while raising her three children, she worked weekends and summers on furthering her education and she received the Bachelor of Education degree from the University of Manitoba. Lois also received her Class Two Principal's Certificate and served as Principal of the Winnipegosis Collegiate for another 15 years, retiring in 1987. Lois was a strong supporter of her community throughout her professional life and into her retirement. As her final volunteer projects, she worked with an able team of friends to ensure the celebration of the 75th anniversary of the Village of Winnipegosis in 1990. A legacy of their work is the book, "Reflections From Little Muddy Water: A History of Winnipegosis". And then, as its founding President, Lois built the New Horizons Centre to enhance the quality of life for the senior residents of the community. The Fredrickson family wishes to express their deep gratitude to the staff of the Winnipegosis Personal Care Home for their exceptional care of Lois in her long and difficult battle with Alzheimer's disease. They are also very thankful for the friendship and support given to her by so many members of the community of Winnipegosis. Special thanks to David and Carol, Linda, Jo, Lee, Myrtle, Stella, Ruth, René and Pat. Funeral service was held on Saturday, October 13, 2018 at 2:00 p.m. from the Winnipegosis Knox Presbyterian Church with the Reverend Pat Langlois officiating. Interment followed in the Winnipegosis District Cemetery. In final tribute, members of New Horizons Seniors Centre offered a luncheon to enable friends and family to gather following the service to share their memories of Lois. In lieu of flowers, donations may be made to the Alzheimer Society, to the Winnipegosis and District Health Centre-Personal Care Home or to the Winnipegosis New Horizons Centre. Sneath-Strilchuk -Dauphin Chapel 204-638-4110 www.sneathstrilchuk.com