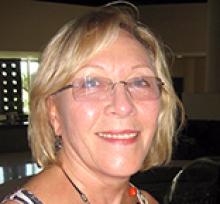 LORRAINE EVELYN HENLEY June 23, 1944 - October 18, 2018 It is with deep sorrow that the family announces the passing of Lorraine Evelyn Henley (nee Rowe), on October 18, 2018, in Courtenay, British Columbia, at the age of 74. After a hard-fought battle with cancer, Lorraine died peacefully at home with family. Lorraine is survived by her husband, Thomas, daughters, Heather (Sandor), Lindsey (Eric) and Hilary (Patrick), and grandsons, Hunter and Caleb. Lorraine is also survived by her sister, Joyce (Ronald) Buchwald, and nieces and nephews, Gordon (Tess) Rowe, Brenda (Federico) Barnabè, David (Crystal) Rowe, Sheri (Blaine) Zurba and Shane (Christie) Rowe. Lorraine was predeceased by her parents, Robert and Gladys Rowe, and brothers, Elmer and Wilfred. Lorraine was born in Fork River, Manitoba on June 23, 1944. She completed her education in Winnipeg, Manitoba and began her career as a resource teacher. She later became a vice-principal, principal, and school board superintendent. Lorraine made life-long friends during her career and those bonds brought her great joy. Lorraine and Thomas married in Neepawa, Manitoba on December 17, 1977. Their three daughters were the center of their lives. The Henleys had joyous times together including summers at their Lake of the Woods cottage and many Christmas gatherings. Lorraine and Thomas retired to Vancouver Island in 2016, made many trips to Mexico, and were overjoyed to welcome grandchildren to their family. Lorraine made fast-friends with the Ladies of Sussex and spent many evenings sitting in the backyard gazebo with Thomas and their neighbours. Lorraine's family wishes to thank the staff at the Comox Valley Hospital Chemo Room. A gathering of family and friends in celebration of Lorrraine's life will be held on October 24, 2018 at 2:00 p.m. at the Comox Valley Funeral Home, Cremation and Reception Centre, 1101 Ryan Rd., Courtenay. Flowers gratefully declined. Memorial donations in Lorraine's memory made to the Canadian Cancer Society would be greatly appreciated.