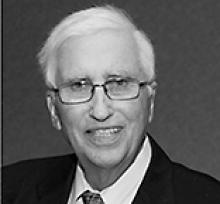 WILLIAM (BILL) STEPANIUK We are deeply saddened to announce the peaceful passing of beloved Father and Gigi, William Stepaniuk, on Thursday, October 18, 2018, with his family by his side. Bill will be lovingly remembered by his children, Stephen, Nancy (Ed) Holowaty and Glenn (Sherry); grandsons, Steven, Jared, Zachery, and granddaughter Chloe; brothers, John (Anneliese) and Michael (Marjorie); sisters-in-law, Sophie Stepaniuk and Mavis (Ed) Kaluzny; brothers-in-law, Louis Tataryn, Allan and Leonard (Marie) Evanchyshin; many nieces, nephews and extended family in Canada and Ukraine. He was predeceased by his wife of 45 years, Elsie (Evanchyshin), his parents, Stefan and Katherine (Kohut), parents-in-law, Peter and Jean Evanchyshin, sister Effie Tataryn, brothers, Peter and Roman, sister-in-law Adeline (Ed) Woytowich, nieces, Sharon (Earl) Firth, Tammy Stepaniuk, Bhupinder Basran, and great-niece Jessica Woytowich. Bill was born and raised in Rosa, MB and was the eldest of six children. Growing up on the family farm meant hard work and some tough times, especially after his father's early passing. He had many fond memories of taking part in community and church events. Travelling to local picnics in the surrounding countryside to play baseball for the Rosa team, was a highlight of his teen years. Bill met the love of his life Elsie, and was married on June 20, 1959. They treated each other with love and respect and made a great team. Bill had a career in education that spanned 36 years - it began in the one room schoolhouses in the rural communities of Alonsa, Rosa, Narcisse, Senkiw and North Springfield. In 1966, he moved to Arthur Day Junior High School in Winnipeg. Retiring in 1989, he kept busy by taking on the role as bookkeeper for the family business, Stepaniuk Landscaping. Bill was a long time member at Holy Eucharist Ukrainian Catholic Church. He served on church council as financial secretary and was a member of both Knights of Columbus council #11330 and Ukrainian Catholic Brotherhood. Bill was proud of his Ukrainian heritage and was an active member with Ukrainian National Federation (UNF). He was an Executive board member, school principal and helped run the bingo every Monday night for over 40 years. In 2016, he was recognized by the Ukrainian Canadian Congress for his volunteer work in the Ukrainian community and presented with the Bulava Award. In his later years, Dad loved to attend his grandchildren's baseball, soccer and hockey games. He was especially proud that his granddaughter Chloe dances with Rusalka UNF School of Dance. Dad enjoyed family card and cribbage games, the daily after supper crib games with Ed always led to laughter and fun. He loved listening to Ukrainian music and singing along to his favourites. Dad's calm demeanour, helpfulness, dependability and quiet wit will truly be missed. Dad was a "true gentleman". Prayers will be sung on Sunday, October 28, 2018 at 7:00 p.m. at Holy Eucharist Ukrainian Catholic Church, 505 Watt St. and Munroe. Divine Liturgy will be celebrated on Monday, October 29, 2018 at 10:00 a.m. also at the Church. Interment at Glen Eden Memorial Gardens. Our family would like to extend a warm thank you to all family and friends who visited our dad at home and during his hospital stay. For those who wish, donations can be made to Heart and Stroke Foundation-Manitoba or Canadian Diabetes Foundation. VICHNAYA PAM'YAT!