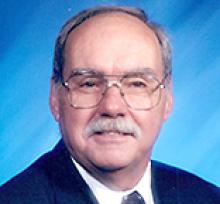 DOUGLAS (WAYNE) THOMPSON March 30, 1946 - October 18, 2018 Wayne passed away peacefully, on October 18, the result of a tragic fall on June 5. He is survived by Cindy Tinsley, his wife of 31 years, as well as brother and sister-in-law, Jack and Theresa Tinsley. Wayne was orphaned at the age of eight and was welcomed by his aunt and uncle, Peg and Art Brown, into their growing family. He considered Art and Peg to be his real Mom and Dad. Wayne was forever grateful for their love and support. He is also survived by his brother Bill (Juanita) Brown; sisters, Cheryl McMurter, Bev Blakely, and Betty Corcoran; and many nieces and nephews. He often reminisced about good times at the Brown cottage on Lake Mazinaw. Wayne moved with the Browns from Ottawa, to Kingston and ultimately to Shilo where he began his university studies earning a Bachelor of Science and ultimately a Masters of Educational Administration. It was in Shilo that he met his best friend, Doug Jordan. Wayne began his career in education at Lowe Farm, then Pierson Collegiate before making Assiniboine South (now Pembina Trails) School Division his teaching home. He taught at Dieppe and then began his career as an administrator at Beaverlodge, then Westdale Junior High School and retired from Oak Park High School. Wayne was a gifted educator, but gave so much more by coaching and managing activities from curling, cheerleading, basketball and to his ultimate passion, Women's High School Hockey. His dedication was recognized by the league's championship trophy being named in his honour. Wayne had many hobbies - photography, baking bread and cookies, building everything from sheds to skunk traps, cross country skiing and fishing. He approached all of these activities with focus and precision. He was an avid reader, especially of the newspapers and never missed a crossword or sudoku. He loved music! Wayne had a great sense of humour, but you had to pay attention. Wayne was a wonderful addition to the Tinsley clan. Many Christmas dinners, work and play at the Tinsley cottage at Brereton Lake, and family milestones were enriched by Wayne's presence. He was a supportive husband to Cindy in all her professional and personal endeavours. Instead of enjoying a well-deserved rest during winter break, he drove Cindy to Texas for a decade, so her Dad did not spend Christmas without family. When his in-laws were in failing health, Wayne participated fully in their care. Wayne was a true introvert but enjoyed the company of his friends and colleagues. He was happiest when he was doing things for other people. A celebration of Wayne's life will be held at Neil Bardal Funeral Centre, 3030 Notre Dame Avenue, (across from Brookside Cemetery) on Monday, October 29 at 7:00 p.m. In lieu of flowers, donations can be made to Oak Table, 109 Pulford Street, Winnipeg, MB R3L 1X8 or a charity of your choice. NEIL BARDAL FUNERAL CENTRE 204-949-2200 neilbardalinc.com