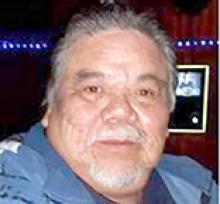 LARRY WAYNE PAUL RAVEN (MAN THUNDER CLOUD) December 8, 1958 - October 25, 2018 It is with deep sorrow that we announce the passing of Larry Raven after a lengthy battle with cancer. He leaves his wife of 39 years, Doreen Raven; his daughters, Daisy, Roberta (Billy) and Flora (Shawn); his son Cassidy; and his siblings, Marilyn (Dennis), Albert (Matilda), Robert (Jennifer), Michael, Norman, Jean, Marion (Danny), Harvey (Margaret), Alec (Bernice) and Garf Bushie. Larry was the proud grandfather of 12 and one great-grandson. Larry was loved by numerous nieces and nephews. He was predeceased by his parents, John and Flora; his siblings, Beatrice, Garry, Raymond (Louise), Brenda, Marie, and his youngest son Lorne. Larry lived his life in Hollow Water, he was a hard-working, devoted, and charismatic man. He was employed by Natural Resources for over 20 years, and as a medical driver for the rest of his career. Larry will be remembered as everybody's friend. He touched our hearts with his infectious jokes and laughter. Wake services to be held in Hollow Water, one night at his house, two nights at Band Hall. Funeral services, Monday, October 29, 2018 at 1:00 p.m. at Hollow Water Band Hall, Reverend Norman Meade officiating. The family would like to thank: CancerCare Pinawa, Dr. Bruno and staff, Dr. Ali and staff of the Pine Falls Hospital, Karen Perchand, Sandra, Wayne, and the rest of the staff at Adam Hardisty Health Centre. Arrangements entrusted to : Rock Fontaine Funeral Director Honour - Respect - Dignity Winnipeg 204-223-2576 or toll free 1-866-499-2601