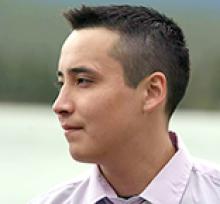 WAYNE ALEXANDER JAMES DEAN MONKMAN It is with great sadness that we announce the passing of our beloved Wayne on Tuesday, October 23, 2018, at his home, with Grandpa LB by his side. Wayne was born on March 6, 1994 in Winnipeg, MB to his parents, Wayne Monkman Sr. and Donna Smith. He grew up in Lundar, MB and spent most of his life at the family home west of town. He attended Lundar School and then worked for various construction companies in many capacities. Lately, he spent time doing various odd jobs with friends and his brothers. Wayne was known by his family and others as a loving kind of guy who loved to make people laugh. He had a heart of gold and took pride in doing things for those he loved. Wayne especially loved being an uncle. He loved his nieces and would always try to spoil them when he could. If you needed a helping hand, Wayne was the one who would volunteer without hesitation. He will be forever remembered by his jovial smile, silly laughter and the crazy things he enjoyed doing. Wayne leaves behind to mourn his parents: dad Wayne Monkman Sr., his mom and stepdad Kevin and Donna Smith; his brothers, Nolan, Ryan (Jessica), LB (Jenn) and Jesse (Nicole); his sisters, Christine and Shay; his nieces, Shanaya, Autumn, Isabelle, Kadence and Karsyn; his grandpa LB; his grandma-in-town Ruth and grandpa Roy; Grandma and Grandpa Baker from Edmonton; and numerous aunts, uncles, cousins and friends. Wayne was predeceased by Grandma Gracie who is taking good care of him, baking him her favourite raisin cookies and listening to his stories about time spent with family. He was also predeceased by many other family members. A memorial service celebrating Wayne's life will be held at 2:00 p.m. on Wednesday, October 31, 2018 at the Lundar Community Hall, Lundar, MB with his mom, Donna Smith officiating. A private family interment will be held in the Lundar Cemetery where he will be laid to rest alongside his grandma. Lunch will follow at the hall. His mom would like mental health issues and suicide awareness to be addressed and acknowledged as serious things which steals from you someone who is dear to your heart. Please consider any donations to be sent to any organization who support these issues. Flowers are happily accepted in his memory. The blood of Jesus purifies us from all sin... 1 John 1:7. Arrangements by: ARNASON FUNERAL HOME Ashern - Lundar 1-204-768-2072 1-866-323-3593