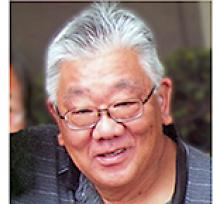 RICHARD ICHIRO FURUKAWA 1948 - 2018 Richard (Dick) Ichiro Furukawa of Winnipeg passed away unexpectedly on Friday, October 26, 2018, at age 70. Richard was born in Winnipeg to parents, Kimiko and Harry Furukawa on February 12, 1948. They lived briefly in Winnipeg and moved to Geraldton, Ontario where his father found work. After a brief illness when he was three, Richard and his mother moved back to Winnipeg to be closer to their families. His father would return home on weekends to visit. He grew up in Elmwood. After completing his education, he started his career with MTS and retired in 2002. After his retirement he volunteered at the Japanese Culture Centre and Victoria Lifeline. Due to failing health, Richard had to give up his volunteer work. His hobbies included gardening, cross word puzzles and watching sports. He was predeceased by his parents, and his siblings, Donna and Laurie. He is survived by his brother Ken, nephew Harrison and niece Kimiko Walthall; his uncle Tom and cousins Debra and Robert; his cousin Doreen Amadatsu and family; cousins and aunts Jean and Pat in Ontario. He will be sadly missed by his dear friends, Doug, Ed, Lawrence, Nick, Rick and Kris, Irene, Kathleen, Ken, and his lifelong friends, Jim Norris and Les Murata of B.C. He will be sadly missed by his neighbours, Sally, Dennis and Linda. In lieu of flowers, please make donations to the Winnipeg Pet Rescue Shelter or the charity of your choice in his memory. Memorial service 1:00 p.m. Friday, November 9, 2018 at Bardal Funeral Home, 843 Sherbrook Street. Bardal Funeral Home 843 Sherbrook Street, 204-774-7474 Condolences: www.bardal.ca
Publish Date: Nov 6, 2018