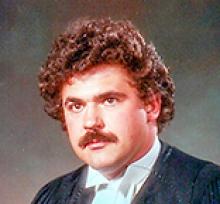 PETER EDWIN FALK Peter passed away unexpectedly on October 26, 2018 at the age of 62. Peter is survived by his brother Karl (Nadia) Falk; sister Roswieta Falk; nieces, Rebecca Brooks, Erica (Sebastien) Ball and Laura (Ryan) Harby; nieces' children, Tessa and Cedric (their father Kevin) Brooks, Meredith Ball and baby Harby due in February. Also bereft are his aunts, Margarete Dorber and Helen (Roy) Millar; uncle Kuno (Magda) Neumann; numerous cousins, especially Liese Dorber, Bob (Joy) Unrau and Murray Falk; and other relatives in Canada, the United States and Germany. He was predeceased by his mother Maria Falk in December, 2017 as well as his father Peter Falk in 2011. Peter grew up in Winnipeg. He attended high school at Dakota Collegiate, where he was a member of the 1974 and 1975 Dakota Lancers men's basketball teams who were inducted into the Manitoba Basketball Hall of Fame. It was on that court that he earned the nickname "Bear." Later, as a coach, he was happy to share what he had learned (especially from Dale Bradshaw) with young players in schools (including Sisler Spartans varsity girls), community clubs, and provincial juvenile boys' and provincial juvenile girls' teams. Peter coached the Dakota Collegiate Lancers varsity women's basketball teams back to back provincial championships in 1990 and 1991. In 1992, Peter was named Manitoba High Schools Athletic Association Coach of the Year. Peter studied at the University of New Brunswick School of Law, articled in Toronto, and returned to Winnipeg to practice. He was an avid collector, especially of coins and cars, but also of practical jokes, riddles and puns which he sometimes shared. Peter will be interred at 1:45 p.m., Tuesday, November 13, 2018 in Glen Eden Memorial Gardens, followed by a celebration of his life at 3:30 p.m. at 603 Wellington Crescent at Academy Road (Unitarian Church). Friends and relatives are encouraged to share in a photo-tribute, stories, and condolences for the family by visiting Peter's memorial page at IntegrityDeathCare.com Those who so wish may make a donation in Peter's memory to the Heart & Stroke Foundation of Manitoba, 1379 Kenaston Boulevard, Winnipeg, MB R3P 0Y4 (www.heartandstroke.ca) or a charity/cause of choice. INTEGRITY Cremation & Funeral Planning 204 295 5408 - IntegrityDeathCare.com
Publish Date: Nov 10, 2018

PETER EDWIN FALK Unexpectedly on October 26, 2018, Peter passed away. He was a loving son, brother, uncle and great-uncle. A lawyer by profession, Peter was, at heart, a Dakota "Lancer." Basketball was a big part of his life, first as a player and then as a coach, leading to many lasting friendships. A longer obituary will appear in a future Saturday paper. Friends and relatives are encouraged to share in photo-tribute, stories and condolences by visiting Peter's memorial page at IntegrityDeathCare.com INTEGRITY Cremation & Funeral Planning 204 295 5408 - IntegrityDeathCare.com
Publish Date: Nov 3, 2018