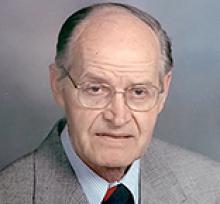 DR. IHOR MAYBA May 23, 1931 - October 25, 2018 Peacefully on October 25, 2018, Dr. Ihor Mayba fell asleep in the Lord at Holy Family Home. Cherishing his memory are his wife of 60 years, Helen; son Paul; son John (Natalie), and grandchildren, Julia, Katherine, Andrew and Alexander. Ihor was the son of Ukrainian immigrants who came to Canada from Krywychy, Ukraine, during the second wave of immigration to Canada from Eastern Europe and Ukraine. He was the youngest of five children born to the Very Reverend Ivan Mayba and Sophia Yuschysyn. He was predeceased by his parents, Rev. Ivan (1983) and Sophia (1965); siblings, William (2000), Gloria (2006), Nadia (2011) and Bohdan (March 2018). Born on May 23, 1931 in Vegreville, Alberta, Ihor moved several times throughout rural Saskatchewan, living namely in the communities of Wakaw, Arran and North Battleford, all of which were parishes served by his father. Following his graduation from North Battleford Collegiate Institute, Ihor moved to Winnipeg in 1949 and studied at the University of Manitoba, completing his Bachelor of Science degree in 1952, and his Doctor of Medicine in 1957. He completed his internship at St. Boniface Hospital, and a year of postgraduate work in surgical training at the Colonel Belcher Veteran's Hospital in Calgary, Alberta. On August 9, 1958, Ihor married Helen Dolynchuk, and shortly after the newlyweds were off to Swift Current, Saskatchewan and Brandon, Manitoba, where he started a general office practice. Returning to Winnipeg, Ihor entered the General Surgery program at the University of Manitoba receiving his diploma in surgery in 1962; and then commenced his practice in this field at the Manitoba Clinic. It was at the clinic that Ihor worked in association with orthopedic surgeon Dr. Elmer James who mentored this young surgeon and influenced his decision to pursue further training in Orthopedic Surgery. He was certified by the American Board of General Surgery (1963), and in 1965, he embarked upon his orthopedic training at the Royal Victoria Hospital in Montreal, obtaining his fellowship in 1967. Returning to Winnipeg in 1967, he re-established his medical practice at the Manitoba Clinic as an orthopedic surgeon. For the next 50 years he would have a profound effect on orthopedics, including performing the first total hip and knee joint replacements at the Misericordia Hospital in the 1970s, as head of Orthopedics. He also held staff appointments at the Health Sciences Centre, Children's Hospital, as well as the Rehabilitation Hospital and the Shriners' Hospital; served as an examiner with the Canadian Board for Certification of Prosthetists and Orthotists and as an assistant professor in Orthopedic Surgery at the University of Manitoba. Service, generosity, passion and family were the pillars upon which Ihor lived his life - service to his country as a lieutenant in the Royal Canadian Army Medical Corps and later as a pilot officer in the Royal Canadian Air Force. He was generous with the time he dedicated to his patients doing house calls and seeing people after hours at his office or on weekends. Ihor had many passions - love of his Ukrainian heritage, love of community, love of history and love of his family. Ihor undertook his first of eight trips to Ukraine in 1992. This gave him the energy to write with passion and insight regular newspaper columns for the Winnipeg Sun Ukrainian page and various local Ukrainian newspapers and magazines. There he showcased the Ukrainian community with historical figures, customs, holidays and events. His involvement with the Manitoba Historical and Scientific Society, the Manitoba History of Medicine Society, the Canadian and Manitoba Orthopedic Societies, the Advisory Board of the Holy Family Nursing Home, the Sherlock Holmes Society, the Arthur Conan Doyle Society, the Intrepid Society, the Ukrainian Professional Business Club, the Ukrainian National Home Association, the Ukrainian Fraternal Society and Trident Press; serving as President of many of these organizations, as well as President and board member of the Manitoba Clinic, provided an example for his family and friends of the importance of giving back to the community in a tangible way. Ihor authored two books: one about the history of Orthopedic Surgeons in Manitoba and the other being a book about the Manitoba Clinic. He had no greater passion than for his family, which flourished when it came to his four grandchildren. His greatest joys were following and supporting each of their activities, and witnessing their accomplishments. Dr. Ihor was a lifelong member of the Ukrainian Orthodox Church of Canada, and a member of St. Michael's Heritage parish for the last 17 years. The family thanks Reverend Statkevych for his pastoral care and acknowledge with deep appreciation the volunteers and staff of Holy Family Home for the loving care and respect shown to him. Thank you to Dr. Andrea Babick and Dr. Terry Babick for your compassionate medical and spiritual care. Finally, to the many friends who over the past few years took the time to visit with Ihor, we offer our deepest appreciation and thanks. The family also acknowledges and extends their thanks to Cropo Funeral Chapel for their support and consideration. As per Ihor's wishes, a private funeral service has taken place. Donations in Ihor's memory can be made to Holy Family Home, 165 Aberdeen Avenue, Winnipeg, MB R2W 1T9 or St. Michael's Ukrainian Orthodox Heritage Church, 110 Disraeli Street, Winnipeg, MB R2W 3J5. Vichnaya Pamyat - Memory Eternal.