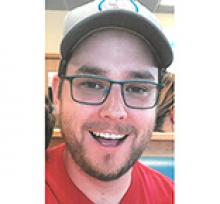 JASON DANIEL KUDLIK It is with deep sorrow, we announce the very sudden passing of Jason Daniel Kudlik, aged 36 years, from Winnipeg, Manitoba on Tuesday, November 13, 2018 at Health Sciences Centre. Jason is survived by his wife of 18 years, Pamela, two young children; son Lukas Daniel and daughter Ellie Francis, father Kurt Kudlik (Edie), sisters, Belinda and Bridgitte (Tyler), mother-in-law Marilyn Coumont, sister-in-law Diane Trumbla (Eric); along with three nieces, Mila, Caitlin and Callie and four nephews, Kai, Quinton, James and Brayden as well as many aunts, uncles, cousins, family and friends. Jason was predeceased by his mother Angele Doyle, father-in-law Gordon Coumont, grandparents, John and Mary Doyle and John and Luise Kudlik. Thank you to the Winnipeg Fire and Paramedic Services, the doctors, nurses and staff at both the Seven Oaks General Hospital and Health Sciences Centre for all your services and wonderful care to Jason and his family. The funeral service will held on Friday, November 23, 2018 at 2:00 p.m. at Klassen Funeral Home. KLASSEN Funeral Home 1897 Henderson Highway, Winnipeg, MB (204) 338 0331 Condolences may be sent to www.klassenfuneralhome.com