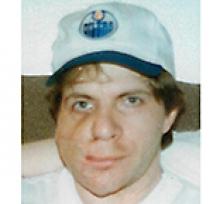 LOUIS NAULT It is with great sadness that we announce the sudden passing of Louis Nault of Flin Flon, MB on Monday, November 19, 2018, at the age of 52 years. Louis moved to Snow Lake, MB in 1984 to work for Hudson Bay Mining & Smelting Co. Ltd. and then transferred to Flin Flon, MB where he continued to work until his passing. Louis loved the Blue Jays and the Edmonton Oilers as well as talking to his family about his job mining underground. Louis is survived by his wife Maria Budgell; son Evan; mother Gloria Nault; sister Tina (Tim) Kwasnica; mother-in-law Hilda (Myles) House; sister-in-law Tracey (Trent) Langan; brother-in-law Rodney (Angela) Budgell; as well as many nieces, nephews, great-nieces, great-nephews, aunts, uncles and cousins. Louis was predeceased by his father Roland Nault; father-in-law Barry Budgell and Roy Glennie. A private family service was held for Louis Nault on Tuesday, November 27, 2018 from the chapel of Dadson Funeral Home in Flin Flon, MB. If friends so desire, memorial tributes may be made to the Canadian Cancer Society, 193 Sherbrook St., Winnipeg, MB R3C 2B7. Dadson Funeral Home & Crematorium Ltd. of Flin Flon, MB was entrusted with the arrangements. 1-877-460-2444 www.dadsonfuneralhome.com