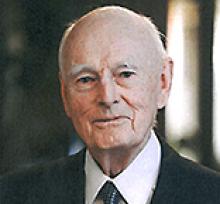 THE HONOURABLE PETER SCOTT MORSE, BA, LLB, DCL, QC Peter Morse died peacefully on December 5, 2018. Peter was born in Winnipeg on May 29, 1927. He was predeceased by his first wife Marjorie Jane Bull whom he married in 1954 and who died in 1980. In 1983 he married Margaret Chown McDonald and acquired a second family of sons and grandchildren. He is survived by his wife, Margaret; children, David (France Morin), Stephen and Ruth (Ronald) Hermann; by Brian (Evelyn), Douglas (Sandra) and Peter McDonald; by grandchildren, Thomas (Virginie Begin), Lawrence (Vickie Sonier) and Catherine Morse; Ashley and Nicole Hermann; Jenna (Phil) Neuendorff; Lauren and Matthew McDonald; by great-grandchildren, Nicholas and Harper. Peter attended Ravenscourt School, the Royal Canadian Naval College, Royal Roads BC and the University of Manitoba, graduating in 1948 with a Bachelor of Arts Degree and in 1952 with a Bachelor of Law Degree. He joined the Royal Canadian Naval Reserve in 1946 after graduating from the Naval College with a First Class Certificate and retired from the Naval Reserve in 1962. Although he had been admitted to the Harvard School of Business in 1952, Peter decided to stay in Winnipeg and to practice law with the firm then known as Aikins, MacAulay and Thorvaldson. He became a senior partner of the firm, President and Life Bencher of the Law Society of Manitoba and was appointed a Queen's Counsel in 1964. He served as a director of the Canada Permanent Trust and Canada Permanent Mortgage Corporations. In 1975 he was appointed a Justice of the Manitoba Court of Queen's Bench and retired from that position in 2002. Subsequently he acted as counsel to the law firm headed by David Hill. Peter also served as Chancellor of the Anglican Diocese of Rupert's Land and received the Honorary Degree of Doctor of Canon Law from St. John's College, University of Manitoba. A memorial service will be held at St. George's Crescentwood Anglican Church on Friday, December 14, 2018 at 1:00 p.m. which he attended all his life and where he serviced as a member of Parish Council and as Rector's Warden. Following the ceremony there will be a reception in the Parish Hall. In lieu of flowers, donations may be made to the Peter S. Morse Fund, United Way of Winnipeg, 580 Main Street, Winnipeg, MB R3B 1C7 or to St. George's Anglican Church Memorial Fund, 168 Wilton Street, Winnipeg, MB R3M 3C3. THOMSON FUNERAL HOME 204-783-7211 Condolences may be sent to www.thomsonfuneralchapel.com