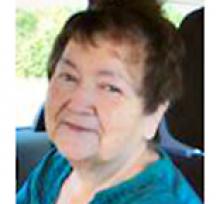 DOROTHY EILEEN MEADE (Rainbow Woman) March 31, 1948 - December 11, 2018 It is with great sadness that the family of Dorothy Eileen Meade announces her passing after a long illness, on Tuesday, December 11, 2018, at the age of 70 years. Eileen will be lovingly remembered by her children, Theresa (Omer), Lori (Rick). Eileen will also be fondly remembered by her six grandchildren, Raya, Stefan (Tamara), John, Daniel, Kody (Bailie) Kalan; great-grandchildren, Noah, Liam, Rowan, Mckenzie; by her brothers, Jack (Dorothy), Norman (Thelma), Billy, (Doreen), Allan, Rollie; by her sister Diana Marlene; by her uncles, Charlie Meade, Elmer Meade, Arthur Meade, and by her nieces and nephews. Eileen was predeceased by her brother Raymond Meade and sister Helena Wood. A Wake has begun Thursday evening, December 13, 2018 at the Manigotogan Community Hall. The funeral service will be held on Saturday, December 15, 2018 at 1:00 p.m. also at the Manigotogan Community Hall with Father Francois Paradis officiating. As per Eileen's wishes cremation will follow with interment at a later date. Arrangements entrusted to : Rock Fontaine Funeral Director Honour-Respect-Dignity Winnipeg 204-223-2576 or toll free 1-866-499-2601