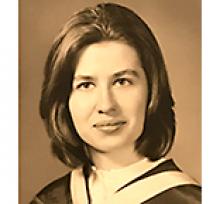 APRIL MARY HENDERSON On November 29, 2018, April Mary Henderson, a resident of Toronto, died. She was born in Winnipeg in 1946 and raised in Beausejour, Boissevain, and Carman. She earned her Bachelor of Science in 1969 from the University of Winnipeg, with a major in math. April moved to Toronto in 1974, where she lived until her death. In 1988, she ran for Parliament in the Danforth riding as a Libertarian and received a higher percent of the vote than all but two of the other 87 Libertarian Party candidates for Parliament. She was predeceased by her mother Norah (1969); brother Paul (1970); and father Stan (1997). She is survived by her brother David and his wife Rena, of Pacific Grove, California, and her niece Karen Henderson (San Francisco.) David will hold a memorial next summer at the family cottage in Minaki, one of April's favourite places.