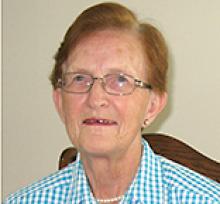 MARY DYCK (nee KLASSEN) 1932 2018 It is with deep sadness that we share the passing of Mary Dyck, loving wife of John H. Dyck and our loving mother, grandmother and great-grandmother, on Thursday December 13, 2018 at the age of 86, in Winkler, MB. Mom is survived by her husband of over 65 years, John; children, Eric (Liliane) of Calgary, Valerie (Adrian) of Kitchener, Greta of Winnipeg and Gerry (Heidi) of Calgary; seven grandchildren, Randall, Tyler, Dinah, Pamela, Kevin, Corinne and Quinn; as well as five great-grandchildren, Brianna, Samantha, Charlie, Nola and Anabel; two brothers, Adolphe (Mary), Herman (Edna); one sister Hermina (Peter); four brothers-in-law; eight sisters-in-law; as well as numerous nieces and nephews. She was predeceased by her father Peter D. (1981); mother Helena (1989); brothers, Peter (2010) and John (1963); sisters, Katherina (1966) and Helen (2013); as well as six brothers-in-law and three sisters-in-law. Viewing will be from 7:00 p.m. until 9:00 p.m. on Tuesday at Wiebe Funeral Home, 121 8th St. in Winkler and at the church prior to the service. Funeral service will be held at 2:00 p.m. on Wednesday December 19, 2018 at the Winkler Bergthaler Mennonite Church 252 6th St. in Winkler with interment to follow at Chapel Cemetery, Morden. In lieu of flowers, donations may be made in Mary's memory to either the Salem Home Foundation or the Alzheimer Society of Manitoba, available at the church. Wiebe Funeral Home, Winkler In care of arrangements wiebefuneralhomes.com