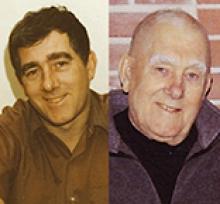 ROBERT JOHN (JACK) WEBB December 9, 1937 - December 12, 2018 It is with heavy hearts that we announce the passing of Jack, husband, father, grandfather, brother, uncle, and friend. He will be lovingly remembered by his wife of 50 years, Gwen; his sons, Brian (Brandy), Dan (Lisa); and his treasured granddaughters, Farrah and Sloan. He will also be remembered by his sister Marlene (Jim); his sister-in-law Mavis (Ron); and his many nieces, nephews, extended family members, and friends. After growing up in Stonewall, MB, he had a short Junior hockey career with the Flin Flon Bombers. He then went to University, after which he enjoyed 27 years as a high school teacher. Among his many hobbies were golf, duplicate bridge, listening to music, reading and gardening. Jack's family would like to express their gratitude to the many excellent health professionals who have helped him over the past several years. A celebration of Jack's life will be held at St. Mary's Road United Church, 613 St. Mary's Road, on Thursday, December 20, 2018, at 2:00 p.m. Because Jack volunteered at two different food banks, in lieu of flowers, donations may be made to the St. Mary's Road United Church Food Bank. Bardal Funeral Home 843 Sherbrook Street, 204-774-7474 Condolences: www.bardal.ca