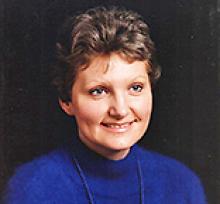 JOAN (SIGRID) JOHNSON February 26, 1950 - December 12, 2018 It is with a great sense of sorrow that we announce the untimely passing of a remarkable woman. Our beloved wife, mother, sister and friend, Sigrid Johnson, passed away on the evening of Wednesday, December 12, 2018, at the age of 68. She left us peacefully with family by her side at the Riverview Health Centre, following a courageous two-year battle with cancer. Sigrid was born February 26, 1950, in Arborg, Manitoba. The first-born child of Snorri and Gudny Johnson, she grew up on the family farm near Arborg immersed in the Icelandic language spoken by her parents and grandparents. Prior to Sigrid entering primary school, Icelandic was the only language spoken in the home. Being her first language she was able to absorb its intricacies both naturally and lastingly. Her mastery of the language of her ancestry from a young age privileged her with an ability to deeply connect with the richness and vitality of Icelandic culture and history. Throughout her life, she generously shared her knowledge and love of all things Icelandic with those around her. Sigrid completed her elementary and high school in Arborg, before going on to earn her BA from the University of Manitoba and BLS from the University of Alberta. In June, 1975, Sigrid began her 43-year career at the University of Manitoba as the Icelandic Librarian and later the Head of the Icelandic Collection in the Elizabeth Dafoe Library. On December 11, 1977, Sigrid married Robert Sproule and together they raised three children. She was a devoted wife and mother, who selflessly put her family above everything else. Throughout her career Sigrid was very involved in the Icelandic community. She was former co-editor/editor of the Icelandic Canadian magazine, former president of the Icelandic National League of North America, former director on the board of the Canada Iceland Foundation, and former board member of the Icelandic Festival of Manitoba. Over the years Sigrid travelled to Iceland on numerous occasions for both business and pleasure. In recognition of her impressive career and contributions to the Icelandic community, Sigrid was honoured with the University of Manitoba Outreach Award (1992); the government of Iceland's Order of the Falcon (2000); the University of Manitoba Long Service Award (2001); was selected Islendingadagurinn's Fjallkona (2003); and most recently received the Jon Sigurdsson Chapter of the IODE Good Citizenship Award (2018). Sigrid was a dedicated woman who truly loved what she did. After she was diagnosed with cancer in August, 2016, Sigrid continued to work at the Icelandic Collection for as long as her health permitted. She officially retired in August, 2018. Sigrid was predeceased by her parents, infant son Andrew Neal; uncle Kjartan Johnson; and uncles (and their wives), Kristjan and Kristin Johnson, Hermundur and Thora Jonasson, and Alli and Bjorg Laxdal. Sigrid leaves behind so many wonderful memories to be cherished by her husband Robert; children, Meghan, Michael and Matthew; brothers, Brian (Loretta Kermaschuk) and Lorne; and brothers-in-law, John Sproule (Jane) and Donald Sproule (Christine Norman). Sigrid also leaves behind her aunt Valdina Johnson and many cousins. The family would like to extend a heartfelt thanks to all those who had a part in Sigrid's health care, to Dr. Harris and the nurses at the Grace Hospital Cancer Centre who saw to her treatment, to the home care nurses whom she saw both at home and at the Fort Garry Access Centre home care clinic, to the staff at the Grace Hospital who cared for her during the nearly three months she spent in hospital this autumn, to the palliative care nurses and home care aides who made it possible for her to return home, and to the staff at the Riverview Health Centre who looked after her in her final days. A funeral service in celebration of Sigrid's life will be held on Friday, December 21 at 11:00 a.m. at Neil Bardal Funeral Centre (3030 Notre Dame Avenue) with Funeral Celebrant Mona Josephson officiating. Interment to take place at 3:30 p.m. in the Arborg Community Cemetery. In lieu of flowers, donations in Sigrid's memory can be made to CancerCare Manitoba. "Love you Mom." Goda nott elsku Sigrid. NEIL BARDAL FUNERAL CENTRE 204-949-2200 neilbardalinc.com