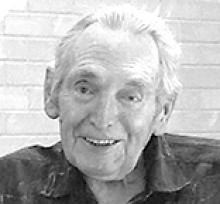 DONALD BRUCE WILKIE It is with extreme sadness that we announce the passing of a kind and gentle man. With family by his side and after a lengthy illness, Don Wilkie passed away peacefully on Tuesday, December 18, 2018. Don is survived by his wife Millie, his daughters, Heather (Doug), Cathy, Christine and Cindy, his sons, David (Dolores), Doug (Doreen) and Chris, and the loves of his life, his grandchildren, Karlie, Cam, Julia, Amy, Lauren, Jonah, Alex, Claire, Eric, Maddy and Lily. He was predeceased by his parents, Elizabeth and David Wilkie, first wife Joan, son Jeff, daughter-in-law Dawn-Marie, and sister Shirley Macdonald. Shortly after his birth in Winnipeg, on Canada Day, 1930, Don and his parents moved to Scotland, then Ireland, where he spent his early years. Sadly, in 1940 his father died at sea on the HMS Foylebank destroyer. In his late teens, Don worked on the family farms in Tilston, Manitoba. In Winnipeg, he was employed by the Singer Company, followed by a career spanning over 30 years with Air Canada Finance Department. While there, he became the Canadian Airline Employees Association Chief Negotiator where he was a fierce but fair labour negotiator. Don enjoyed his time with Winnipeg's John Traverse Cornwall Sea Cadets serving as their Chief Commanding Officer. He formed many lifelong friendships and was always there for anyone in need. He was a handyman and do-it-yourselfer with a surplus of artistic talent, crafting many interesting sculptures and funny cartoons for his kids. Don loved to travel the globe, and for many summers he, with extended family, enjoyed time spent at the lake. Millie and Don shared over 23 years of marriage and among their travels enjoyed their many trips to visit her family in Southern Ontario, as well as delighting in watching their grandchildren grow. Don cherished his grandchildren, and they, in turn, loved their "Papa" and "Gigi". We would like to thank the staff at Holy Family Home, Unit 3A, for all of their support, encouragement and care. A private family service will take place in the New Year. In lieu of flowers, donations can be made to Parkinson Canada, 414 Westmount Drive, Winnipeg, MB R2J 1P2. E.J. COUTU & CO. FUNERAL DIRECTORS 204-253-5086 www.ejcoutu.ca