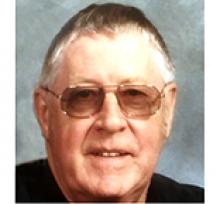 STANLEY ADALJON OLESON Passed away at the Glenboro Health Centre on Sunday, December 23, 2018 at the age of 87 years, Stanley Adaljon Oleson, of Glenboro MB. Stan was born on November 10, 1931 to Kristjan and Margret Oleson. He grew up in Glenboro where he received his education, and for a short stint became a school teacher. In 1953, he married Charlotte Kingdon of Minnedosa and raised their three sons, Chris, Davin and Kelly in Glenboro. Stan served as a councillor and later Mayor of Glenboro, was also a founding member of the Glenboro and Area Foundation, was employed with the Tiger Hills School Division as Secretary Treasurer for many years and was a founding member of the Manitoba Association of School Business Officials. Stan was involved as a director of the Manitoba Curling Association for 22 years serving as Canadian Curling Association President in 1992 - 1993. During his term at the CCA he represented Canada for two years at the World Curling Federation. Stan received numerous awards in connection with his work in the administration of curling in Manitoba and Canada: 1968 - Honorary Life Member of the Manitoba Curling Association 1982 - Honorary Life Member, Glenboro Curling Club 1984 - Gord McCunigal Award - presented by the Westman Super League 1991 - Inducted into the Canadian Curling Hall of Fame 1994 - Honorary Life Member, Canadian Curling Association 1995 - Inducted into the Manitoba Curling Hall of Fame 1995 - Presented with the Ray Kingsmith Award - Awarded by the CCA for exceptional volunteer achievement 1997 - Honorary Life Member, Pembina Curling Club, Winnipeg 1999-2000 serving as Chairman of a Provincial Committee which brought about the amalgamation of the MCA and the Manitoba Ladies Curling Association in May 2000. Stan was a founding member of the Manitoba Baseball Hall of Fame in 1996 and was inducted into the Hall, as a Builder, in 2001. He also received a tremendous honour from the Glenboro Community in the summer of 2000 when the local baseball park was named the "S.A. Oleson Field" in recognition of his many years with the local senior ball club and working at the diamonds. Stan leaves to mourn his passing sons, Chris (Kristine) of Regina, SK, Davin (Janice) of Brandon, Kelly of Winnipeg, five grandchildren, Jennifer (Don), Eric (Cassie), Asia, Johanna and Alycia, and by two great-grandchildren, Elliot and Finley. He is also survived by brothers and sisters-in-law, Maurice (Mary) Kingdon of Minnedosa, MB, Hazel (Bob) Jelfs of Foxwarren, MB, Erle (Alice) Kingdon of Virden, MB, Kathy (Aymer) Lundin of Comox, BC, Gerry (Sandra) Kingdon of Vilne, AB, Peggy Hawes of Creston, BC, as well as numerous nieces, nephews and friends. Stan was predeceased by his wife Charlotte (nee Kingdon), parents, Kristjan and Margret Oleson, brothers, Tryggvi Oleson, Kari Oleson and David Gabel, and sisters, Liney Swainson, Emily Palmer, Veiga Johnson, Loa Green and Jenny O'Quinn. A celebration of Stan's life will be held on Friday, December 28, 2018 at 2:00 p.m. in the Willmor Chapel, Glenboro, with Sharon Hamilton officiating. Interment will take place in the Glenboro Cemetery. Friends that so desire, memorial donations can be made in Stan's memory to the Glenboro and Area Foundation, Box 147, Glenboro, MB R0K 0X0. The family would like to thank the staff of the Glenboro Hospital and Personal Care Home for their care and compassion while Stan was a resident. Online condolences may be extended to the family by visiting www.willmorchapel.com Jamieson's Funeral Services of Glenboro-Holland in care of arrangements 204-827-2480