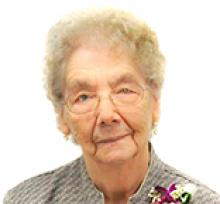 ALMA ALICE MEILLEUR (nee BERNIER) Born: November 18, 1920 With great sorrow we announce the passing of our dear mother Alma, Grandma, Great-Grandma and Great-Great-Grandma at the age of 98 on Thursday, December 20, 2018 at the Fisher Branch Personal Care Home surrounded by family. She is survived by her children: Louise, Gilles (Carmelle), Adrian (Debbie), George (Rose), Robert (Angie), Aurele (Rita), David (Cheryl), Donald (Jacquie) and Paul (Pam). Also left to mourn her passing are her sister Simonne and husband Auray Meilleur, and a sister-in-law Eva Bernier. Mom's life revolved around her children and the three generations of grandchildren. She enjoyed spending time with each one and spoke highly of their achievements. Mom also enjoyed a special friendship with Karen Schreyer and Gwen Sutherland. She was predeceased by her husband Maurice, parents, Joseph and Corinne (nee Gregoire), sister Florence, brothers, Paul and Roger, and two grandchildren in infancy, Candace and Kimberley and numerous in- laws. Mom began life in St. Jean Baptiste, Manitoba. Then, at the age of 11, with her parents and siblings, she moved to Fisher Branch. Life was very difficult on their new farm due to the harsh conditions of the Interlake. However, the church became a large part of their life. There she met the love of her life, Maurice Meilleur, and they married on September 26, 1949 and the growth of their family began - one daughter followed by eight sons. Their family began to grow again with a new generation beginning with the first granddaughter Rachelle, born in 1973, daughter of son George and Connie. Mom and Dad felt so blessed to have many outstanding and generous farm neighbours. Mom was blessed with an angelic singing voice and participated in the church choir continuing into her 90s. Her passion for music flowed down to her children. Mom was very involved in community work and reveled in the fact that she was so independent and drove other seniors to activities, especially bingo. Mom prided herself on saying, "no pills and no pains," until very recently. Special thanks from Mom's children to her sister Simonne, nieces and nephews who sang Christmas carols to Mom the day before her passing. Mom showed her joy by opening her eyes and mouthing the words to "O Holy Night", her favourite Christmas carol. Also, thanks are extended to the Fisher Branch Personal Care Home staff for all their outstanding care of Mom in the 18 months following her move from the chalet to the personal care home. Special thanks to Karen and Darlene for their personal touch towards Mom and her family. Funeral service will be held on Friday, December 28, 2018, at 11:00 a.m. in the Immaculate Conception Roman Catholic Church in Fisher Branch, Manitoba, with Father Roy George officiating. Pallbearers will be Mom's grandchildren, Justin Meilleur, Ryan Meilleur, Riley Meilleur, Danton Meilleur, Denis Meilleur and Chris Spence. Honorary pallbearers will be Lionel Bernier, Lorette Truszynski and Lucien Meilleur. The cross-bearer will be Melanie Graham. In lieu of flowers, donations can be made to the Fisher Personal Care Home Foundation, Box 548, Fisher Branch, MB R0C 0Z0. FISHER FUNERAL HOME INC. In care of arrangements. 204-372-6803 or 204-372-6271