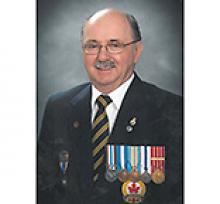 WILLIAM (BILL) CLEMENT LORD Peacefully on January 3, 2019 William (Bill) Clement Lord passed away in the company of family. Dad was born in Winnipeg on January 10, 1938. He served 28 years in the Canadian Armed Forces and retired as a Sergeant in the Air Force. He was posted in various locations including Trenton, where he and Lorraine (nee Springer) had their sons, Bill and Garth. He was also posted in Edmonton, CFS Gypsumville and Moosejaw where he and Susan had their daughter Nicole. He also served in Ottawa and then spent 10 years at Field Aviation in Portage La Prairie. Bill was a very organized man with a place for everything. He loved the outdoors taking his family camping, hunting and fishing. He spent years camping at Stevenson and Nutimik campgrounds. He also enjoyed his trips out West to see his military friends. He loved his sports including coaching his boys and watching his grandchildren play sports. Dad was predeceased by his mother Gladys Simpson and stepfather Trevor. He is survived by, and will be sadly missed by, his sister Gail, his children, Bill (Gay), Garth (Christine) and Nicole Slade, as well as his grandchildren, Blake, Nicole, Brody and Zeek together with Samantha and Dwight. A memorial service will be held at Klassen Funeral Home, 1897 Henderson Hwy., on Thursday, January 10, 2019 at 10:00 a.m. KLASSEN Funeral Home (204) 338 0331 Condolences may be sent to www.klassenfuneralhome.com