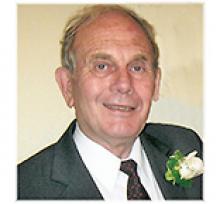 REV. MURRAY WENSTOB October 23, 1931 - December 12, 2018 Murray Wenstob was born in Viking, AB to parents, Paul and Mabel Wenstob. Passed away peacefully at home in Swan River, MB, surrounded by his loving family. He married Joy (Kisil) in 1958 in Edmonton, AB. They were each other's best friends and soulmates for over 60 years. They raised five children, Cathy, Linda, Bonnie, Tim and Paul; later including spouses, 11 grandchildren and three great-grandchildren. They also welcomed three Vietnamese brothers into their home as their own. He is survived by his family; brother Gordon, sister-in-law Niki Wenstob, Bea, Renee, Mary-Ann (Kisil), spouses and families. Predeceased by his parents; brother Meldrum; sister Stella; in-laws, Mike and Pauline Kisil; and other relatives. He was a graduate of the University of Alberta, earning three degrees, and was a sessional lecture in the Faculty of Education. He took part in most sports and taught school in Wembley, AB. He was ordained into the United Church of Canada in 1959, and served Rochester, Hardisty and Hughenden, AB, Oak Lake, Griswold, Gillam (Industrial Chaplin) and Swan River, MB. His approach was an emphasis on Community Based Ministry for over 35 years. Church duties and justice issues were part of him, he served on many community boards including youth and camp groups. With the help of family, and his love of the outdoors, together they built their log home and cabin. During retirement, his enjoyment was discussing political and current issues with friends at the coffee shop. He never missed an auction sale or country music event. His last effort was publishing a book about the people of Northern Manitoba, "People of the Land, Tundra, and Rail". He was a friend to all; generous, caring, patient, positive and always thinking of others. He shall be deeply missed. Swan Valley Funeral Services 204-734-5775 www.swanvalleyfuneralservices.com