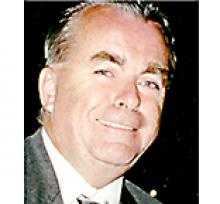 TERRY JOSEPH RICHLEW We are sad to announce the sudden passing of Terry at age 70. Survived by his sister Shirley Spiwak and her family, and the families of the late Dawn Cyr, as well as Aunt Dorothy and her family and numerous cousins. Terry was predeceased by his father and mother Raymond and Rose Richlew, and his sister Dawn Cyr (Richlew). Terry started his career early working with his dad in their family business at Red River Auto Body Ltd. where he learned the automobile trade industry before starting a long career as an estimator with MPI in 1973 and retired in 2007. He took pride in everything he did and was a perfectionist. At 21, he planned an extensive seven-week trip to Europe with a friend touring 11 countries and driving a total of 6000 miles. He enjoyed travelling throughout his life. Terry loved Blues music and had an extensive collection. He was an antique collector, wood-finishing expert and also created unique metal art using his welding skills. He created many masterpieces that we will always treasure. Terry also enjoyed being an outdoorsman including hunting, fishing, boating, and had many Master Angler Awards. He enjoyed going to ice fishing tournaments with his sisters and his niece Rae, and spending weekends at Lake of the Woods with his cousins and friends. He also spent time picking wild blueberries, which was a family tradition, and got his cooking skills (Chef TJ) from his dad who thought nothing of setting up his BBQ in the woods and making the family rotisserie chicken while they picked blueberries. Terry also made a variety of liqueurs using freshly picked blueberries, saskatoon berries and chokecherries. Terry enjoyed walking and having coffee with his friends and was a great conversationalist. He was known for his one-liners and you could always count on him to entertain you with his uniqueness. Terry will be remembered as a wonderful brother and proud uncle who had a no-nonsense attitude, the coolest sayings and the biggest heart for those he loved. A private family service will be held. In lieu of flowers, donations can be made to the Health Sciences Centre Foundation. Terry, we will miss that mischievous smile of yours. STAY FROSTY May God grant him eternal rest. KLASSEN FUNERAL HOME 1897 Henderson Highway, Winnipeg, MB (204) 338 0331 Condolences may be sent to www.klassenfuneralhome.com