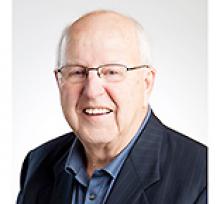 LAWRENCE OLIVER (L.O.) POLLARD January 26, 1928 - January 4, 2019 Peacefully, on January 4, 2019, at the St. Boniface Hospital, Lawrie Pollard, aged 90, passed away in the presence of his family. Lawrie was predeceased by his parents, Wilbur and Aleta (Scarlet) Pollard, as well as by his twin brothers, Earle and Douglas Pollard. He is survived by his wife Frances (Struthers) to whom he was married for 61 years and by his children, Gordon and Susan (Gregora) and their children, Michael, Jacqueline and Brock; John and Beth (Wherrett) and their children, Ryan, Eric and Evan; Shelagh and Philippe Bohemier and their children, Madison, Benoit and Simon; Barbara and her son Peter; and Douglas and Kristie (Pearson) and their children, Aleta, Maxwell and Parker. Lawrie was born in Winnipeg and grew up in River Heights, attending Queenston, Robert H. Smith and Kelvin schools, followed by United College. He joined his father at the family printing business, Saults and Pollard in 1947, joined later by his brothers, Earle and Doug. In 1962, he became President of the company at the relatively young age of 34, when his father died. The company name was changed to Pollard Banknote in 1976, as Lawrie began to transition away from general commercial printing to specialize in security and lottery ticket printing. Until the end of his life, he maintained a strong interest in the business and could be seen walking around the office and plant daily. His genuine interactions led to close relationships with many of the staff. A lesson he learned from his father was the importance of hiring good people and treating them well. Because of this philosophy, not only was his business successful, but Lawrie was blessed with many enduring relationships with customers, partners and most importantly, the staff at Pollard Banknote, whom he held in such high regard. He had an entrepreneur's appetite for risk. In the 1980s, in his mid 50s, Lawrie mortgaged his house and assets to buy the equipment necessary to enter the instant lottery market. It was a stressful transition for the business, with new technology to develop and his bank was close to calling the loan. However, with the help of friends, his dedicated staff, a new bank and his sons, the company soon thrived, becoming the second largest producer of instant lottery tickets in the world, today employing over 1,600 people. Lawrie was active in the community, serving as Campaign Chair for the United Way of Winnipeg in 1975 and Board Chair in 1986. He was President of the Winnipeg Chamber of Commerce. He was President of the Canadian Graphic Arts Industries Association. He was an inaugural member of the Associates of the Asper School of Business. In addition, he served on countless not-for-profit boards including: The Winnipeg Foundation, The Salvation Army, CancerCare Manitoba, Winnipeg Humane Society and the Children's Museum. He enjoyed serving on business boards, including Winpak, Gendis, Grain Insurance and Guarantee, Greater Winnipeg Gas Company, Montreal Trust and the 1974 Winnipeg Jets Hockey Club. Lawrie had a lifelong interest in politics, even running for office for the Conservatives in the 1973 provincial election. He lost the election by a single vote cast by the Returning Officer, which turned out to be a blessing, as he turned his attention back to his business. He was honoured as Manitoba Entrepreneur of the Year in 1991 and inducted into the Manitoba Business Hall of Fame in 2014. Outside of work, Lawrie was a long-time member of the Manitoba Club and the St. Charles Country Club. He had a terrific group of friends, including his Monday golf group, his friends the Sigs, the Boys of Friday and many others. He and his friends were known to travel the world in search of good golf and a better martini. The family gathering point was Victoria Beach, where he and his wife Fran would spend time with their children and grandchildren, and where he would try mostly unsuccessfully to keep up with his wife playing bridge with friends. The cottage verandah on 3rd Avenue was a happy place for him where he'd spend hours reading the Free Press, the Globe and the Herald. He had a deep appreciation for the unique community of Victoria Beach, serving as the first chair of the Cottager's Association and enjoyed engaging with people throughout the community. Lawrie's last few years were affected by memory loss and dementia. But he never lost his positive, cheerful outlook. The family would like to thank his personal assistants, Miriam Stobbe Reimer and the late Lori Stewart, as well his other caregivers, including Nathalie, Zofia, Alexandria, Agatha, Colleen, Melanie, Loretta, Jacey, Christina, Trudy and Nicole for their care and compassion. In lieu of flowers, donations can be made to The Winnipeg Foundation, The United Way of Winnipeg, or your charity of choice. A memorial service will be held for Lawrie at 10:30 a.m. on Saturday, January 19, 2019 at the Winnipeg Convention Centre. NEIL BARDAL FUNERAL CENTRE 204-949-2200 neilbardalinc.com