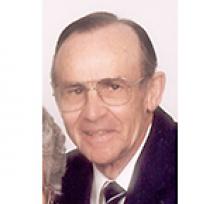 THOMAS ALBERT (BERT) SANDERCOCK March 21, 1925 January 5, 2019 Peacefully, Bert passed away after 93 years of rewarding life and public service. Born in Morden, Manitoba, and growing up in Dunston, soil and hockey were in Bert's blood. He was a hard worker in a big family, driving the team to the grain terminal, pitching sheaves, a skill Bert would win a prize for many years later when the art was all but forgotten. Summers were a time for baseball but, when winter came, Bert and friends were hard at it on the hockey rink, refusing to miss a game even when storms blocked the roads. One time the adults cancelled but the team snuck out, first driving then walking when the car got stuck, all so the game would go on. Bert won the 1943 Provincial B Manitoba championship playing for Swan Lake, won with the Aggies through university and was a fan for life, never happier than when the Jets returned to Winnipeg. Personally, Bert's passions were many: hockey, of course, but also golf and curling, generating many awards and trophies along the way. He loved fishing and duck hunting with friends, serving as Leader for 4H and Cub Scouts, all while gardening endlessly, turning family homes into flower-filled picture postcards. Family times with Ella and the kids meant camping trips across Canada, places like the West Coast, Montreal for Expo 1967, Hecla Island, ski & snowmobile trips in the winter, all spreading a love of being outdoors through the entire family. Trips to Dunston for family picnics and the mandatory horseshoe pitching game were Bert's favourite, allowing him to show off his skill at pitching ringers. Community involvement was another passion. Bert served on the Mapleton School Board, boarded hockey playing brothers for the Selkirk Steelers, established and served on the St. Andrews Municipal Planning Commission, served on the International Joint Commission to review the Garrison Dam Proposal and earned a life membership with the Selkirk Kinsmen. Never one to sit still, hobbies were a succession of furniture recovering, then woodcarving, in which he excelled, with time thrown in to document his family genealogy and travel with Ella to England to explore the origins of the Sandercocks. Bert's love for family came full circle with the birth of his grandchildren and great-grandchild, all of whom brought him great joy. Bert's dedication to Manitoba agriculture spanned his entire working life, shown by his career-long commitment in the Department of Agriculture, culminating as Chief Provincial Horticultural Specialist in the Department of Soils and Crops. Recognition by the public and his peers came in many forms: Life Membership in the Manitoba Institute of Agrologists, being elected a Fellow of the Agricultural Institute of Canada, receiving Honourary Life Membership with the Manitoba Vegetable Growers Association, the Meritorious Service Award from the Province of Manitoba, the 125th Anniversary of Canada Commemorative Medal from the Governor General and, perhaps one of the proudest moments in his career, being inducted into the Manitoba Agricultural Hall of Fame. Bert is survived by daughter, Shelley (Jeff) Tallin of Winnipeg; sons, Blair (Sean) Sandercock of Edmonton and Garth (Patricia) Sandercock of Calgary; grandchildren, Lisa Sandercock, Jodi (Lee) Richardson and Ian (Sheryl) Sandercock, Naomi Tallin, Darcy Tallin; great-grandchild, Emmy Ella Rose Richardson; sister, Mavis (Don) Cram; and brother, Garry Sandercock. Bert is predeceased by his loving wife of 58 years, Ella; his parents, William and Emma; brothers and sisters Melbow Sandercock, Mavis (Hector) Patterson, Walter (Florence) Sandercock, Edgar (Betty) Sandercock, Velma (Alan) Keith, Mel (Hazel) Sandercock and Doug (Betty) Sandercock. Bert's life was made much easier by the tireless care and attention of the Convalescent Home staff, to whom the family is very grateful. The family will host a memorial and lay Bert's ashes to rest beside Ella at Little Britain United Church Cemetery on June 17, 2019, at 1:00 p.m. In lieu of flowers, donations may be made in Bert and Ella's names to the Selkirk Community Arts Centre. Condolences, pictures and videos may be left on his tribute wall at www.gilbartfuneralhome.com Gilbart Funeral Home, Selkirk, in care of arrangements.