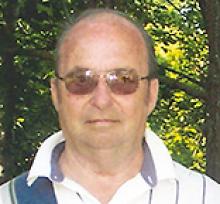 LIONEL RONALD JOSEPH ASSAILLY Lionel died peacefully in Winnipeg, Manitoba, on January 8, 2019, at the age of 80. Lionel is survived by his wife, Helen May; sons, John (Paulette), Keith and Jeff (Karen), and daughter, Dawn (Emile); all of Winnipeg, Manitoba. He is also survived by his brothers, Justin (Dorothy), Eugene (Cecilia) and Raymond (Joanne); and sisters, Jeanette, Tilly (Ken), Genny (Henry) and Marian; as well as sister-in-law, Agnes; and brother-in-law, Einer. Lionel was predeceased by dad, Jean Assailly; and mom, Irene Boisvert, of Laurier, Manitoba; also by brother, Eddie Boisvert; and sister, Claudette Inman. Lionel was born on July 2, 1938, in Ste. Rose Du Lac, Manitoba. After marrying his wife in 1961 in Churchill, Manitoba, they had three children, moved to Winnipeg, Manitoba in 1967 and had one more child a year later. He worked for many years for the Department of Indian and Northern Affairs before retiring in 1992. He had five grandchildren, Michelle (Brent), Ashley (Cory), Brandon (Maggie), Dana and Chloi. He also had four great-grandchildren, Alexis, Jersey, AJ and Harrison. Lionel had a love of five pin bowling, Blue Jays baseball and wrestling. He was an avid reader and could be seen watching The Young and Restless and CSI. He loved to sit on the porch and watch people, working on cars and loved to interact with the friends of his children. He was also involved with the Charleswood Legion and the Rockwood Army and Navy. A funeral is scheduled for January 15, 2019, at 10:00 a.m. at Chapel Lawn Funeral Home, 4000 Portage Avenue, Winnipeg, MB with a reception to follow. All are welcome to attend and celebrate Lionel's life. The family would like to thank the staff at West Park Manor for the wonderful care given to Lionel. For those who wish to sign the online Guest Book please visit www.chapellawn.ca Chapel Lawn Funeral Home 204-885-9715