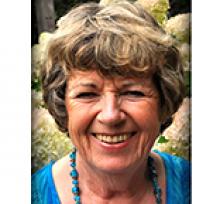 LINDA PATRICIA BAZIUK March 7, 1949 - January 12, 2019 Peacefully with her family by her side, Linda lost her courageous but short battle with cancer. Linda will be lovingly remembered by her children, Shayne (Laureen), Sherry (Mike); grandchildren, Naytan, Nash, Griffin and Jessi May; stepfather Orville; sisters, Lorrie, Valery (Ross)and Betty; very special friends, Vivian and Michael, Joan and Dakota. As well as, many very special nieces, nephews, and extended family and friends. Linda was predeceased by her father Gordon Hallett, mother Madeline Millings, and grandparents. Linda was born in Winnipeg and raised in the farming community in Fisherton, Manitoba. At the age of seven the family moved to Winnipeg and then later to Stonewall. Linda started working at a young age where she stocked shelves at a local pharmacy in Winnipeg. She was married in July of 1968 to Morris Baziuk and they had two children, Shayne and Sherry. Linda stayed home to raise their children until they were in school full time. She started her career with Manitoba Hydro in Stonewall and advanced with them and worked in Winnipeg for many years. Later moving back to her roots in Fisherton, MB. There she worked in the Fisher Branch School as a resource teacher and then moved on to the Fisher Branch Credit Union, until she retired. Linda had an amazing sense of community and spent much of her time volunteering on many boards including the Fisherton Horse Club, Community Club and the Parade of Lights just to name a few. Her creativity flourished with her green thumb, with her park like yard and garden. She also loved to paint and has many paintings hanging around the community and in the homes of friends. She was also known for her spotless house and hospitality. Coffee is always on so come on in. Her later years moving back to Winnipeg to be close to her children and grandchildren. Her pride and joy! Where they were able to share so much more time and adventures now that they were closer. Even though the brain aneurysm slowed her down, her determination that she had was admired by many that knew her. Once in Winnipeg, she started volunteering again. This time at the Deer Lodge Centre where she has won numerous awards for her countless hours of service and was famously known for her wonderful smile. The family would like to thank all the doctors, nurses and support staff with CancerCare, Palliative Care and MAID for all the care they gave Linda. A Celebration of Life will be held on Saturday, January 19, 2019 at the Ukrainian Hall in Fisher Branch, MB at 1:00 p.m. Luncheon to follow. A family burial will be held at a later date. In lieu of flowers, a memorial gift in Linda's honour can be made at www.deerlodgecentrefoundation.com FISHER FUNERAL HOME INC. In care of arrangements. Fisher Branch, MB 204-372-6803 or 204-372-6271