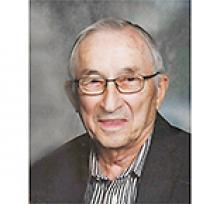 BOHDAN BERT CHUBEY It is with great sadness that we announce the passing of Bert Chubey on January 13, 2019 at Boundary Trails Health Centre, two months short of his 89th birthday. Bert was born in Rosa, Manitoba on March 18, 1930 and was the ninth of ten children. He leaves to mourn his wife Sally of 58 years, his children, Michael, Robert (Valerie) and Catherine (Alex), his grandchildren, Sara, Alice, Ryan, Jackie and William and his sister Audrey. Bert spent most of his professional life working as an agricultural research scientist at the Morden Research Station and was a longtime resident of Morden, Manitoba. His obituary may also be viewed at www.wiebefuneralhomes.com. A celebration of his life will take place at St. Paul's United Church in Morden, Manitoba on Saturday, January 19, 2019 at 11:00 a.m. In lieu of flowers, donations may be made to Boundary Trails Health Centre Foundation dedicated to the expansion fund or palliative care. Wiebe Funeral Chapel, Morden In care of arrangements wiebefuneralhomes.com