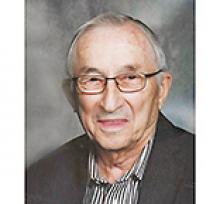 BOHDAN (BERT) CHUBEY March 18, 1930 - January 13, 2019 Bohdan (or Bert as he was known to friends and family) was born on March 18, 1930, to mother Katherine and father Nazarko on a farm in the rural community of Rosa, Manitoba. Ultimately, Bert would be the ninth of ten children, including six brothers and three sisters. As a young man, Bert enjoyed working on the farm with his father and siblings. Farming and agriculture would play a significant role in both his personal and professional life - from the farmlands of his youth, to the academic halls of top US universities; from the important horticultural work of the Morden Research Station, to the family strawberry fields of Rosa and the improbable wheat fields of Tanzania. It was on that childhood farm that Bert had a mishap while cutting fence posts. Although it was surely a traumatic event, and resulted in a potentially limiting injury, Bert never let it slow him down. Years later, he continued to regale strangers and grandchildren alike with the tale of his missing thumb. In the spare time of his youth, Bert loved to play ball for the local Rosa baseball team. He was a great athlete and a skilled catcher. At one of these games, a young female score keeper for the rival Grunthal team would catch Bert's eye. It would take him years of courting, calling and letter writing, but eventually Bert and Sally would be married in 1960 and go on to raise three children - Michael, Robert and Catherine. While he enjoyed the hard work and the challenge of farming, Bert's ambitions would lead him to an accomplished academic career. He obtained a Bachelor of Science at the University of Manitoba; a Master of Science at Penn State; and, his PhD at the University of Minnesota. Post-university, Bert began a career as a research scientist at the Morden Research Station specializing in horticulture and special crops. His knowledge and expertise would take him and Sally to live and work in Windsor, Ontario, where Bert was the head of quality control at the Green Giant Company in Canada, and to Ottawa where he worked at Agriculture Canada Headquarters. In 1989, Bert and Sally moved to Arusha, Tanzania, where he directed the Tanzania / Canada Wheat Project teaching farmers in the developing world how to grow and sustain critical food crops. In all, by the time he retired in 1993, Bert spent over 33 years developing new food crop strains and horticultural techniques for application in Canada and throughout the world. Always looking to contribute to others, Bert was an enthusiastic volunteer on many executive committees in his community, as well as an active member of the Morden Kinsmen, K-40s and St. Paul's United Church. Bert's commitment to helping others went well beyond the borders of Manitoba and would find him volunteering post-retirement in the fields of Colombia and in his family's homeland of Ukraine. Bert and Sally loved to travel and they made many close and dear friends in the places they visited throughout the world. At home in Morden, Bert was well known for his Kerr apple wine, love of gardening, and for growing his own strain of garlic, Bert's Best. In the early 1970s, Bert and his brothers, Morris and Sam, partnered to open and operate a strawberry farm in Rosa. Summers were busy for the Chubey clan during those years, with the brothers and their families tending to the strawberries and helping customers who would come from far and wide to pick strawberries. Unfortunately, a tornado would deal a fatal blow to the strawberry farm in 1981. Bert was a familiar face at the Morden Curling Club, and spent many hours shuffling at the Morden Seniors Centre. He was also known to friends and family as an avid dancer and lover of music. Bert and Sally were active square dancers for 23 years. He also lived for a good polka, and was often the last to leave the dance floor. Bert and Sally would continue to dance the nights away well into the twilight years of his life. But those who knew Bert best, knew that above all else he was a proud and devoted family man. Bert cherished his wife Sally, to whom he was married for 58 years, and was an ever-present and always wise father to his children. He was highly respected by his numerous nieces and nephews, and could always be counted on to give thoughtful advice and a helping hand to any who asked. Bert passed away peacefully on January 13, 2019, two months shy of his 89th birthday. He was predeceased by his parents; his brothers, John, Dan, Jack, Sam, Fred and Morris; and his sisters, Lily and Anne. Bert will be deeply missed by his wife Sally and his remaining sibling, Audrey, and forever remembered as a wonderful father and grandfather by his children, Michael, Robert (Valerie) and Catherine (Alex); and his grandchildren, Sara and Alice, Ryan and Jackie and William. Wiebe Funeral Chapel, Morden In care of arrangements wiebefuneralhomes.com