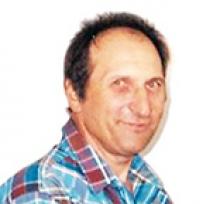 SARAFIN EDWARD AMBROZIK October 12, 1946 - January 15, 2019 In the early morning of January 15, 2019, with his family by his side, Sarafin passed away at the age of 72, at the Gimli Hospital. Sarafin is survived by his brothers, John, Frank and Andy; sisters, Mary, Vickie (Walter) Humeniuk, Anne Genyk, Helen (Ron) Sumka and Jane Ambrozik; sister-in-law Irene Ambrozik. He was predeceased by his mother and father, brother Walter; brothers-in-law, Metro Genyk and Mike Yuzwa. He enjoyed life on the farm. His greatest joy was to work with machinery. In 2005, due to kidney failure he was not able to help anymore. Sarafin liked Ukrainian music and his favourite singer was Hank Williams. He enjoyed listening to C.K.J.S. Zabava program and Polka Party. He always looked forward to going to Dauphin Festival. We will miss him so dearly. Special thank you to the Riverdale Place residents and staff, also to the doctors, nurses and staff who helped Sarafin at the hospitals and with dialysis. A private family service will be held on Monday, January 21, 2019 at 11:00 a.m. in the Broad Valley Community Hall, with Father Peter Chorney officiating. Interment at St. Anthony's Cemetery in Zbaraz. FISHER FUNERAL HOME INC. In care of arrangements. Fisher Branch, MB 204-372-6803 or 204-372-6271