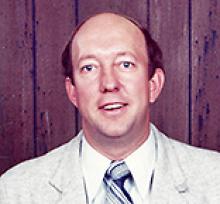 DUNCAN EDWARD GEISLER On Friday, January 18, 2019 after a long and brave struggle with prostate cancer, our "Papa", Duncan Edward Geisler, aged 70 years, died in the presence and love of his family at the Lakeshore General Hospital in Ashern, MB. Duncan was predeceased by his father Edward and his beloved godson Brandyn. He joins them now to enjoy a cold one and look down upon those that remain: his loving wife Lise; his mother Antoinette; children, Roland, Paul (Alexandra) and Marianne (Bernard); grandchildren, Annalise and Lydia; his brother Dennis; his sisters, Shelley (Randy) Bjornson and Sandra (Ken) Falk as well as many other dear friends and relatives. Duncan was born in Ashern, MB on March 11, 1948 and grew up on the family farm just west of town, ingraining in him a love of farming, nature and being outdoors. His love of the outdoors served him well as he worked for several years in Manitoba's north as a surveyor, labourer and sometimes camp cook (to the misfortune of those he cooked for). He talked often of the fish he would catch, the fun he had camping and the beauty of the wilderness. We all enjoyed the fishing and hunting trips we went on with him (including when we didn't catch or shoot anything) and will remember him fondly as we sit in the boat, in the blind or on the tractor. He graduated with a Law degree from the University of Manitoba in 1978 and began his professional life in Ashern. His career in Law brought him to every corner of the province, and it was in his travels for work that he met the love of his life Lise and started his family. He also followed his mentor James Anderson's footsteps and became involved in politics where he ran several times for the Liberal party. His professional and political work allowed him to travel the province, demonstrating how deeply he cared about his community and the people of all walks of life that he made connections with. We will forever remember him as the hard working, fun-loving, and multi-talented Papa, husband, brother, son, friend, lawyer, politician, pilot, singer, hunter, fisherman, guitar player and jokester that he was. "To live in hearts we leave behind is not to die" A private service with his family will be held on Friday, January 25, 2019 at the Grace Lutheran Church. A public funeral service will be held at 3:30 p.m. on Saturday, January 26, 2019 at the Ashern Centennial Hall with Rev. Dr. Scott McAnally officiating. Interment will follow in the Grace Lutheran Cemetery. Pallbearers will be Elliot Geisler, Derek Bjornson, Craig Bjornson, Brenna Sigfusson, Randy Geisler and Jim Broustal. Honorary pallbearers will be the doctors, nurses, staff and health care professionals who have taken care of him over the years. In lieu of flowers, donations may be made in Duncan's memory to the Lakeshore Hospital Guild, c/o Julie Bergner, PO Box 721, Ashern, MB R0C 0E0 or to CancerCare Manitoba Foundation Inc., 675 McDermot Ave., Room ON 1160, Winnipeg, MB R3E 0V9. Arrangements by: ARNASON FUNERAL HOME Ashern - Lundar 1.204.768.2072 1.866.323.3593