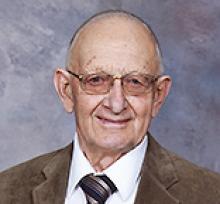 LLOYD RALPH JANKE January 5, 1929 - January 22, 2019 Lloyd Janke, 90, passed away on Tuesday, January 22, 2019. He is survived by his wife of 65 years, Louise (Baker), children, Stuart (Elaine), Lila (Cornel Wollmann), Verle-Ann (Mark Irvine) and Dawn-Lynne (James Bedford), 13 grandchildren and five great-grandchildren. He was predeceased by his parents, Frederick and Susan Janke, brother Albert and wife Eleanor, sister Ethel and husband Gus Recksiedler, brothers-in-law, Jack Murray, Don Alexander and Michael Dixon. He is survived by brother Wilfred (Aileen), sisters, Thelma Alexander, Ruth Murray and Lillian (Steve) Trappitt and sister-in-law Dorothy Dixon. Lloyd was born in Rosenfeld, MB on January 5, 1929 and grew up on the farm near Morris. On September 11, 1953 he married Louise. Lloyd was employed by the Public Works Department in Morris and then in Morden, until his retirement in 1994. Throughout Lloyd's life, faith and church were important to him, being involved in church council, Sunday School and choir. He enjoyed gardening, curling, camping, fishing, music, dancing, bowling, games and his family. He and Louise took numerous vacations together. In 2001 they moved to Winnipeg. Thanks to family and friends for their thoughts, prayers and visits, to the staff at Seine River Retirement Residence and to Kurt, for his compassionate home care services. The memorial service will be held Saturday, January 26 at 2:00 p.m. at Faith Lutheran Church. In lieu of flowers, donations may be made to Faith Lutheran Church Memorial Fund, 1311 Dakota St., Winnipeg, MB R2N 1V8. Arrangements Entrusted to: Morris Funeral Home 204-746-2451 www.morrisfuneralhome.ca