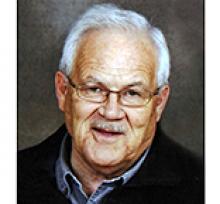 ROBERT JOHN (BOB) NAIRN 1945 - 2019 Robert John (Bob) Nairn of Roblin, Manitoba passed away on Tuesday, January 22, 2019 at the Dauphin Regional Health Centre at the age of 73 years. Bob is survived by his wife Diane (nee Chyz) of Roblin; son Paul (Joanne) Nairn of Winnipeg, daughter Allison (Ryan) Lawson of Brandon; and his precious grandchildren, Tristen and Cooper Nairn, Gillian, Barrett, Jasper and Willa Lawson. Bob will also be missed by his sister Rilda (Gord) Van Hussen of Balmoral, his mother-in-law Anne Chyz of Winnipeg; his cousins, Florence Stephenson of Glenboro and Albert (Elaine) Nairn of Brandon and their families; and Diane's siblings, their spouses and their families, as other extended family, and a host of friends. Bob and Diane were the founders and longtime owners of Nairn-Chyz Funeral Home in Roblin. A prayer service will be held Friday, January 25, at 7:00 p.m. at the Chapel of NairnChyz-Wolkowski Funeral Home in Roblin. The funeral service will be held on Saturday, January 26, at 11:00 a.m. at the Knox United Church in Roblin. Bob will be laid to rest in the Grandview Memorial Gardens at Grandview, Manitoba. Memorial donations may be made to the Knox United Church Memorial Fund, Box 156, Roblin, Manitoba R0L 1P0. NairnChyz Wolkowski Funeral Home entrusted with arrangements.