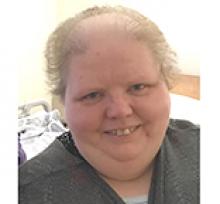 KAREN ANDERSON August 20, 1966 - January 24, 2019 It is with heavy hearts that we announce the passing of Karen Anderson at the age of 52, surrounded by family, on Thursday, January 24, 2019 at the Health Sciences Centre. She was predeceased by her parents, Lorne and Doris Anderson, and her brother Greg. She will be lovingly remembered by her sisters, Kathy (Brent) Sigurdson, Elin (Lawrence) Johnson and Lorraine (Hugh) Collins and brother Gordon (Cindy) Anderson, nieces and nephews, Ryan (Melanie) Johnson, Darren (Bridget) Johnson, Stephen (Stephanie) Sigurdson, Paul Sigurdson, Chris (Kirsten) Sigurdson, Garry (Jackie) Anderson, Allison Anderson (Murray), Derrick (Brittney) Anderson, Melissa (John) Palen, Angela Collins and Megan Collins (Wade) and great-nieces and nephews, Sophia and Sawyer Anderson, Lucas, Lexi, and Leia Anderson, Molly and Zoey Monkman, Taylor, Dylan, and Asher Johnson, Hugh and Jaxon Palen, Soren and Kade Sigurdson, and Hayden Sigurdson. Karen lived in Winnipeg most of her adult life. She worked for 22 years at the Paddle Wheel Restaurant at The Bay Downtown. She was a valued employee and made many lifelong friends along the way. She truly enjoyed her job and loved both her co-workers and her customers. Her weekend visits home to Gimli were filled with the fresh aroma of her favourite meals made by Dad, with enough for everyone, and even care packages to take home. Her nieces and nephews were always excited to see her and eat "Karen's Cookies". Karen was diagnosed with Rapid Progressive MS in 2006. She bravely battled the disease and remained independent until December, 2011 when she was no longer able to work and moved back to Gimli to be close to family support. She was able to live independently in the family home with home care and family support until 2018 when she moved to Betel Home in Gimli. Although she was much younger than most of the other residents, she became involved in activities and was proud to be asked to be part of the Betel Advisory Board as the resident advocate. Despite all of her health struggles, she remained positive and left a lasting impression on everyone she met. We would like to say thank you for all the love and care given to Karen by her home care team and the staff at Betel Home. We would also like to thank the doctors and nurses at the Gimli Community Health Centre and Health Sciences Centre MICU for their care and compassion. At her request, no formal service will be held. A private family memorial will be held at a later date. In lieu of flowers, donations can be made to the MS Society at 1465 Buffalo Pl., Winnipeg, MB R3T 1L8 or to Karen's Karebears, a team of her nieces and nephews who ride yearly in the MS Bike Tour to raise money in their fight against MS. Love you forever, rest in peace. NEIL BARDAL FUNERAL CENTRE 204-949-2200 neilbardalinc.com
Publish Date: Feb 2, 2019