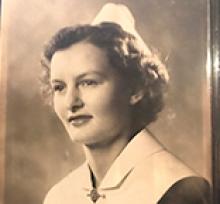 LOIS ELAINE VINCENT (nee HEAPY) May 6, 1928 - January 26, 2019 Lois passed peacefully on Saturday, January 26, 2019, at Meadowood Manor, with her family by her side. Mom is predeceased by her husband Clarence Vincent and her parents, Clarence (Curly) and Clara Heapy. Mom leaves to mourn her sister Margaret Taylor; brother Gerald Heapy (Charlotte); children, Faye Harden Meech (Dennis), David Vincent (Sandra), Lee Meagher (Pat); and her grandchildren, Travis, Regan (Matt), Kyle, Derek (Miranda), Jordan (Tyler), Blair (Matt), Margot, George, Connor, James and Rae; as well as her great-grandchildren, Laila and Lauren. Mom was born near Oak Lake, MB, where she attended school and was taught by her father who was the principal there. During those years she loved to play in the surrounding hills where she started to explore from a young age. After high school, Mom went to Winnipeg where she took her RN and graduated from Winnipeg General Hospital in 1950. She embarked on her nursing journey, moving to Vancouver, BC and working at St. Paul's General Hospital downtown. Fun times were had working on the maternity ward and after hours she quickly developed a group of like-minded friends who enjoyed hiking and skiing the surrounding mountains before the onset of ski lifts. Many weekends were spent in these mountains and Mom even managed to purchase a small parcel of land at the bottom of Grouse Mountain. In 1955, she returned to Manitoba and began another chapter of her life meeting and marrying her husband Clarence. Before long they had three children born very close in age, and settled into life in Windsor Park. Mom stayed home in these years and was very involved in the Windsor Park United Church where she sang in the choir. She dabbled in art lessons and kept very busy raising her family. In the early 1960s, Mom and Dad purchased a small hobby farm in Strathclair, MB, and this became an integral part of the family life. Many summers were spent with cousins where Mom and her sister Marg would have as many as 11 kids at a time taking swimming lessons, all fitting into her 1948 Austin in layers! Mom was never afraid to tackle anything with no running water or even a phone. The full summers from June to September would be spent at the lake before returning to the city after harvest. As her family got to high school, Mom returned to the profession she loved and was back in her element for many years. She worked in public health at Riverview Health Centre and never missed a reunion of her classmates whom she was in touch with on a regular basis. When her husband Clarence had a stroke at age 59, Mom retired a little earlier than planned where she again reinvented herself to caregiver. In her early 60s, she decided to move back to White Rock, BC, to give Clarence an easier environment to ride his motorized scooter. It was a place they both loved and Mom, being the strong woman she was, was able to provide them with a life of travel and again picked up an active social life. They returned to Winnipeg every summer, Mom driving across the mountains in her fearless way each year, until they returned to live in Winnipeg in their later years. Mom suffered a brain virus that finally caused her to slow down and not drive. Assisted living became the final phase and Mom spent her last years in nursing care at Meadowood Manor. Our family would like to extend our deepest appreciation to all the staff and special nurses at Meadowood Manor, who made our mother's last years so comfortable. In lieu of flowers, donations can be made to Meadowood Manor, 577 St. Anne's Road, Winnipeg, MB R2M 3G5. There will be a service for the interment of Lois' remains this coming summer in Mather, Manitoba. Announcements to follow.